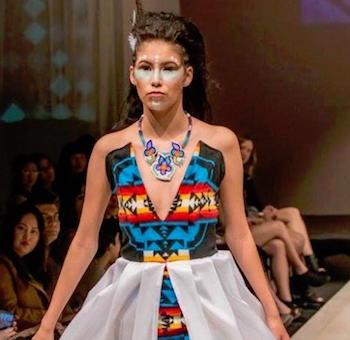 One of Buffalo’s designs was modelled at Western Canada Fashion Week in April. (Photo courtesy of Tishyna Buffalo by Steve Li Photography )

Tishynah Buffalo of George Gordan First Nation is on her way to her first major fashion show in New York City.

The 25-year-old Regina-born woman was recently invited to the International Fashion Week event by one of its lead organizers.

Tishynah is just becoming known in the mainstream fashion community, but her work creating Pendleton jackets is already making her a success.

“I went to the International Fashion Week in Regina in April, and I was friends with (the organizer) on Facebook… She was looking for designers so I reached out to her and she invited me,” said Buffalo, about how she received the invite.

In fact, she owes a lot to Facebook, because it’s been her active life on social media that’s helped her launch her career so quickly.

“They’re picking designers to go to New York and showcase their clothing there. It’s me and two others… One is my aunty,” she said.

Buffalo now lives on the Alexander First Nation in Alberta, but has travelled between both Saskatchewan and Alberta to have her work modelled in fashion shows.

This upcoming New York event happens Sept. 9 to Sept. 11 and is the first major fashion event she will have attended. Her past shows involved smaller venues, and included a local charity event, the Walk to End Violence show in Edmonton—a cause she said she believes in.

“I think I’m doing well so far since I’ve been actually putting myself out there. I remember when I first put my page up. I didn’t have barely any likes from anyone, but it’s almost at 2,500 people now…” she said.

Buffalo first started sewing in high school, but creates everything from beaded earrings and headbands to full powwow outfits, plus dresses, skirts and shirts. She’s just started getting into making wedding dresses and couture gowns, she said, but it’s still her Pendleton creations that are the bestseller.

Pendleton is a fleecy material with colorful, Aboriginal culture-inspired geometric patterns on it. Buffalo’s $175-jackets have sold to people as far away as New Mexico.

“I want to start getting into, not only Indigenous design clothing, but I want to make other clothing also. I’m still learning each thing though and still learning how to get it out there, I guess,” she said, adding she is still surprised when people recognize her and ask about her clothing.

It’s difficult to break into mainstream fashion, said Buffalo. But one of the more surprising challenges she has faced is the issue of cultural appropriation.

The fear of crossing that boundary has actually prevented Buffalo from selling more items than she would like, even though she’s completely willing to share her culture with others.

“This one woman came up to me and she was from another culture… She asked me if it was okay for other cultures to wear Native print clothing. She said when she tried to wear that kind of clothing before, people would tell her she couldn’t wear it…

“I think it’s OK for people to wear a clothing design,” said Buffalo.

But she still respects traditions around items such as the headdress, acknowledging there is a special purpose for some aspects of her culture.

“That’s for people who’ve earned it... like leaders,” she said.

As far as Buffalo’s design idols go, she loves the work of Shayne Watson from Arizona, who also does Pendleton jackets, among other designs. And she admires Christi Belcourt, for the lavish floral prints and beaded patterns she uses in her styles.

Buffalo’s own grandmother is an inspiration to her, too. She made Buffalo a fancy dance outfit and showed her exactly how to sew everything when Buffalo was only 12-years-old. 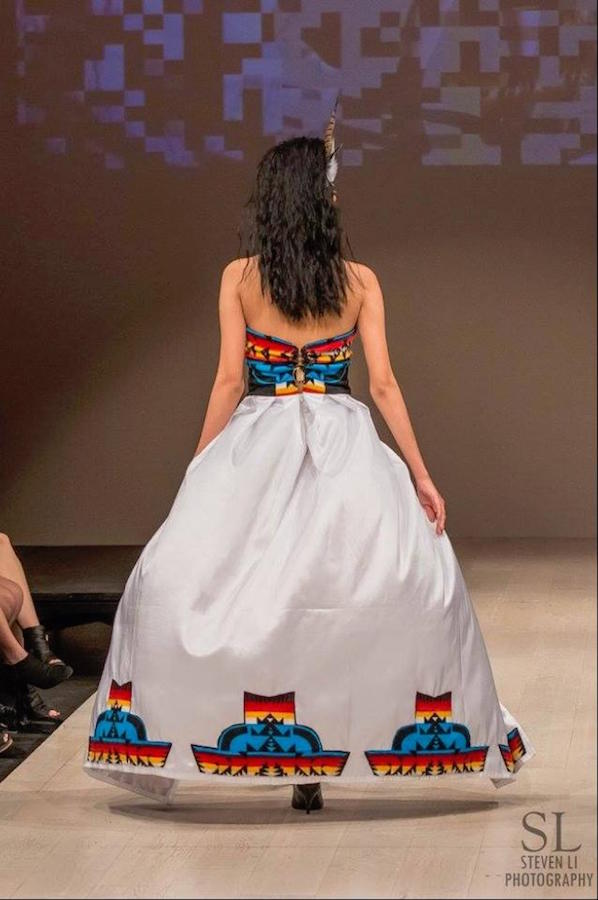 And of course, a helpful mother can’t be overlooked. Shelley Buffalo is her daughter’s biggest supporter, and a talented beadwork artisan herself. She’s ready and willing to tell the world just how hard her daughter has been working at her craft.

“People who have seen it, love her stuff. They like her sewing, and say it looks really professional… Like really store bought,” said Shelley.

“I hope one day she’ll have her own business and she can fulfill all of her dreams… And not be shy,” she added, with a laugh.

To help fund her trip to New York in September go to: https://www.gofundme.com/2fdujxg 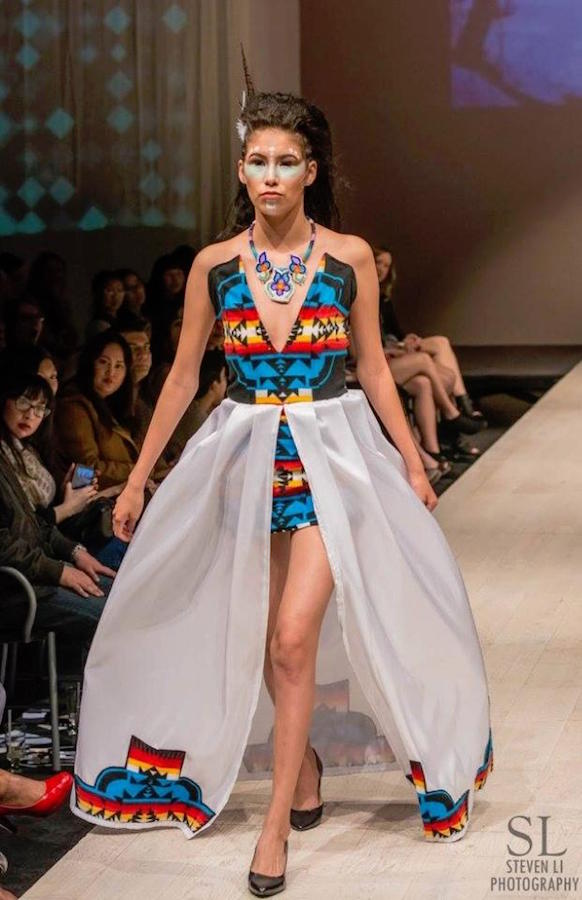 One of Buffalo’s designs was modelled at Western Canada Fashion Week in April. (Photo courtesy of Tishyna Buffalo by Steve Li Photography )