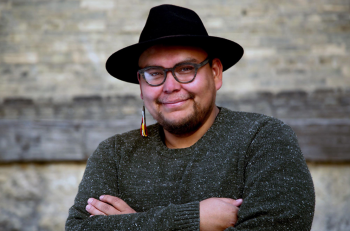 “I believe that this program will also contribute to a cultural shift in some of the attitudes that we have in this industry, and make it more equitable moving forward.” — Kadon Douglas of BIPOC TV & FILM
By Adam Laskaris
Local Journalism Initiative Reporter
Windspeaker.com

A new training bootcamp for would-be showrunners will allow Indigenous creatives a chance to learn more about the television and film industry.

Run by the grassroots non-profit BIPOC TV & FILM, applications are being accepted through Sept. 19 for Black, Indigenous or people of colour who have had a TV or web series in development with a Canadian broadcaster or production company, a minimum of co-producer credit on a Canadian TV or web series, or a story editor credit on an animated series.

“The goal of this program is to get mid- and upper-level writers ready for the jump to showrunning,” said writer and showrunner Anthony Q. Farrell, lead facilitator of the bootcamp in a press release.

A showrunner has the overarching creative authority and management responsibility on a set, more senior to a typical writer or producer.

Ryan Cooper, who is a BIPOC TV & FILM board/visioning committee member, will be among those taking part in the bootcamp. Though Cooper, who is from Peguis First Nation in Manitoba, said he doesn’t yet see himself becoming a showrunner, he said he’s looking forward to taking the training to learn more about what the showrunner’s daily responsibilities are.

Cooper’s previous credits include being an executive producer on the web series Alter Boys and a producer on the National Film Board of Canada’s documentary When The Children Left.

Cooper said there was a bit of hesitancy on his part that he wouldn’t quite fit into the entertainment industry.

“Growing up in a pretty poor family, I didn’t have access to a camera like everyone else in the world,” Cooper said.

As a two-spirited person and a member of the LGBTQ+ community, Cooper said he was worried that he wouldn’t fit the archetype of a traditional writer or producer.

“But it turned out those were my biggest strengths,” Cooper said. “I put (in) a piece of who I am and everything that I do regardless of what genre, what type of style of filmmaking it is. I try as best as I can to explain the intricacies around our differences.”

Most importantly, Cooper said he’s hoping to accomplish his goal of proving his own doubts about himself are wrong.

“I just want to let people know that if you're wanting to get into this industry, I think that you should at least try,” Cooper added. “I just want to encourage people to find their strengths and reach for their dreams.”

Kadon Douglas, who is the executive director of BIPOC TV & FILM, said that the organization’s work looks to highlight and uplift Indigenous storytellers without them having to sacrifice creative control.

“A big part for me is leaving room for Indigenous people to tell their stories, their way, and for them to have full sovereignty,” Douglas said.

As for the bootcamp itself, Douglas hopes that the participants can learn more about the job description of a showrunner, which includes a day session at one of Farrell’s writing rooms.

“Our work is to demystify showrunning,” Douglas said. By providing an opportunity like this we're empowering people so that they are able to lead in their shows and to be confident.”

Douglas hopes the bootcamp’s impact will be long-lasting.

“I believe that this program will also contribute to a cultural shift in some of the attitudes that we have in this industry, and make it more equitable moving forward,” Douglas added.