Annual vigil for missing and murdered Indigenous women will go ahead despite pandemic, NWAC says 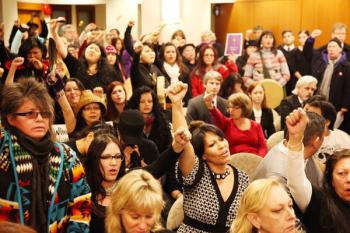 Murdered and Missing Women and Girls vigils have been held annually for 15 years. File photo.

“Their grief is raw and their tears are many.” — Lorraine Whitman, president of the Native Women’s Association of Canada

The head of the national organization that represents Indigenous women in Canada says the COVID-19 pandemic will not stop the annual vigil for First Nations, Métis and Inuit women who have been murdered in this country.

Lorraine Whitman, president of the Native Women’s Association of Canada (NWAC), says the event will go ahead on Oct. 4, but the ceremony will be conducted online to ensure the safety of participants.

“We have to recognize the knowledge of our sisters, our mothers, our grandmothers who have told us that those we have lost cannot be forgotten,” Whitman said.  “We need to be able to support the families of those who have been taken from us and to let them know that we will continue to do that even though we are in a pandemic. We are not going to forget them.”

The Sisters In Spirit Vigil, which was first held in 2005, began as way to draw attention to the disproportionately high number of Indigenous women and girls who are murdered or go missing in Canada. Last year, it was held in more than 100 communities across the country.

In Ottawa, the vigil has previously been marked with a march through the downtown streets followed by a gathering on Parliament Hill. This year, however, it will take the form of a webcast that will begin at 2 p.m. EDT and will be broadcast on the NWAC website and on Facebook.

Whitman will emcee, but the main speakers will be family members who have lost loved ones.

Those watching the vigil from the safety of their homes or community centres will be asked to light one candle during the event, and then another after sundown that night to honour the lives that have been taken.

Ms. Whitman has spent much time over the summer consoling mothers and other relatives of recent victims of the tragedy.

“Their grief is raw and their tears are many,” she said. “The webcast may actually allow us to reach more people than have been able to participate in previous years, and it will let the families know there is someone in every corner of Canada to help them.”

NWAC raised concerns when the federal government failed in June to keep a commitment to release a National Action Plan for meeting the Calls for Justice of the National Inquiry intp Missing and Murdered Indigenous Women and Girls that would have mapped a strategy for ending the violence.

The organization had provided Ottawa with a list of actions, based on consultations with its grassroots members, that could have been the basis of such a plan. It is now forming a committee of Indigenous experts and leaders to provide additional input in the hope that a plan can soon be tabled.

“Until governments take strong and decisive action, the killing will continue,” said Whitman.

“It truly saddens me that we are still having these vigils because our women and girls are still being murdered and disappearing,” she said. “It breaks my heart to know this is continuing. That is why we had the national inquiry. Why is this still happening?”