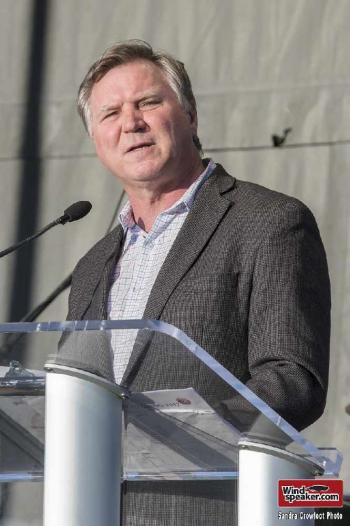 The question of what’s going to happen with the Trans Mountain pipeline is a very important one for the province, said Richard Feehan, Alberta’s Minister of Indigenous Relations.

In a far-ranging interview with Brittney Pastion of CFWE-FM, Feehan said he’s heard very clearly that Indigenous people want a part of it.

Soon after the May 29th announcement that the federal government would purchase the existing pipeline from Kinder Morgan to ensure its expansion, First Nations in Alberta announced they wanted in on the business end as part owners.

“It’s a great time for Nations and Métis to come forward and express that interest,” Feehan said.

“As groups together, as collectives, they have a very strong voice in making sure that when (the pipeline) comes back out of federal government hands and comes into the community, well, I’d love to see First Nations and Métis communities be there at the table taking an ownership stake.”

Alberta is not only in favor Indigenous equity in the pipeline, the province is committed to Indigenous ownership in renewable energy projects.

“We made a commitment that we are going to have 5,000 megawatts of electricity produced by renewable in this province by 2030. We put that out a little piece at a time.”

The first project bidding round was for 300 megawatts. For the second bid, Alberta made it a requirement that projects must include 25 per cent equity participation of First Nations and Métis. This, or else the province wouldn’t consider the project.

This allows decision making by the Indigenous owners as to how Alberta’s energy markets are going to move forward, said Feehan.

The winners of this second bidding round will be announced in the fall of this year.

“And you are going to see First Nations owning part of the utilities system in the province of Alberta and that’s a significant change,” Feehan said.

During the interview, the minister also weighed in on the recent extension granted the National Inquiry on Missing and Murdered Indigenous Women and Girls. Inquiry commissioners have shared their disappointment in the federal government, which gave the inquiry six additional months only. The commission had asked for two years.

Crown-Indigenous Relations Minister Carolyn Bennett said the reason for the shorter extension period was because some provinces did not support the two-year extension. When asked what direction Alberta gave Ottawa on the subject, Feehan noted that Alberta was one of the first provinces asking for the inquiry in the first place.

“But, as the process rolled out the frustration didn’t go away; people still feeling that their hopes and dreams were not appropriately being met.”

And that was the message he carried to the federal minister; that Alberta really wanted to see support for family members, including counselling and support in the courts.

Feehan added he is hopeful that any recommendations that flow from the inquiry will have some teeth to affect change.

Feehan talked about long-term relationship building with Indigenous people and organizations in the province and what work he was excited to undertake.

“We are re-writing the curriculum, Grades 1 to Grade 12, to include Indigenous history, traditions and knowledge,” Feehan gave as an example. “We’ve been working on that curriculum for the last year, but that still has to be run out.”

He said Alberta is forming groups of people who will help review the curriculum and watch it as it goes forward to be able to tell government that ‘This is working. This is not working. This is an accurate reflection of our community and this is not’.

Other initiatives the minister said he was proud to move on, included the $100 million put into water to reserves—the first province to do so—because a lot of the reserves were living on boil water advisories.

He is also excited about government’s commitment to renew the consultation agreement for all land resource extraction.

“So anybody who wants to cut a tree, dig a hole is going to have to go talk to the Nations and to the Métis communities before they do that.”

Coming soon will be a big announcement of the requirement of all Alberta public service employees to begin training in Indigenous knowledge, history and traditions.

“That’s a lot of people in the province of Alberta,” said Feehan, adding it could take five years to get everyone through the training. An Elders council will help with that project “to make sure we stay true to traditions.”