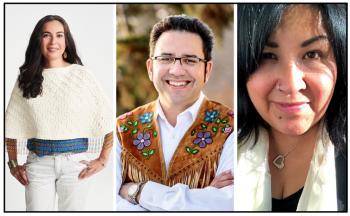 There’s less than a week left to apply to the inaugural Audible Indigenous Writers’ Circle.

The six-month mentorship and workshop program will feature up to a maximum of 15 First Nations, Métis or Inuit writers, ages 18 and up.

Program participants will be matched up with established Indigenous writing mentors who will assist them with their creative works.

Audible is an Amazon company. One of its missions is to amplify voices of Indigenous peoples in an effort to support reconciliation and enhance equity.

The deadline to apply for the program is May 5. Program details are available at https://www.audible.ca/ep/IWC

Besides weekly meet-ups, program participants will be able to take advantage of three full-day workshops that will be led by mentors.

Richard Van Camp will serve as one of the mentors.

Van Camp, a Dogrib Tłı̨chǫ award-winning writer who has lived in Edmonton for the past decade, has written 26 books in a variety of genres over the past 26 years.

Mentorship is nothing new for Van Camp. His resume includes working for Writing in Residence programs at the University of Alberta, Athabasca University, MacEwan University and for the Edmonton Public Library.

Besides seeing his own finished works become books, Van Camp said he also gets great pleasure when he assists others with their literary goals.

“It’s a different kind of medicine for me,” he said about helping others get book deals or published. “I’m so proud that I played a small part having them find their way.”

Writers who will serve as mentors for the Audible Indigenous Writers’ Circle include Kim Wheeler and Tanya Talaga.

Wheeler, a member of Sagkeeng First Nation in Manitoba, has worked for mainstream and Indigenous media since 1993. She now lives in Winnipeg where she is an independent producer.

Wheeler has taught at the National Screen Institute of Canada, as well as at Red River College.

But this will be the first time she has been involved in a mentorship program.

Wheeler envies those who will be participating in the program as they will be receiving advice from reputable and well-known Indigenous writers.

“I never had that when I was younger,” Wheeler said.

Talaga, whose family is from Fort William First Nation in northern Ontario, is an Anishinaabe journalist who now lives in Toronto.

Her accomplishments include writing a pair of national bestsellers, Seven Fallen Feathers and All Our Relations: Finding The Path Forward.

Talaga is currently the president and CEO of Makwa Creative, a production company that works to boost Indigenous voices through TV, documentary films and podcasts.

Other mentors for the Audible Indigenous Writers’ Circle are expected to be announced in the coming days.

After the application deadline, the mentors will help to choose those that will take part in the program.

Emerging Indigenous writers from across Canada, with one exception, are encouraged to apply. Due to provincial contest regulations, Quebec residents are not eligible for the program.

After selecting those that will take part in the program, the goal is to launch it in the summer and have it continue until this December.

Van Camp said one of the end goals is to have mentees complete their work and be at the point where it can be pitched for publication.

“I can be the bridge to finding the right agent or publisher,” he said, adding he has extensive contacts through his own writings in a variety of genres.

Van Camp’s 1996 acclaimed novel The Lesser Blessed was turned into a movie in 2012. More recently he earned acclaim with Moccasin Square Gardens, a book of short stories.

At the end of the six-month program, participants will have the opportunity to explore recording with Audible, depending on the progress of their creative work.