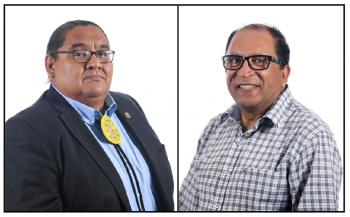 “They've got a totally outdated mandate and we're calling on the minister to enable those changes within IOGC so they've got a modern mandate that takes into account the changes in the energy sector.” —Larry Kaida, assistant to the president of the Indian Resource Council
By Shari Narine
Local Journalism Initiative Reporter
Windspeaker.com

The Indian Resource Council is fed-up with a 25-year-old memorandum of understanding with the federal government that has failed to move them along in acquiring control over the oil and gas on their reserves.

Now they are “demanding a high-level meeting” with Indigenous Services Canada (ISC) Minister Marc Miller and calling on him to take action on the Crown agency Indian Oil and Gas Canada (IOGC) and its co-management board.

In a resolution passed June 30, the IRC directed Miller to “initiate an Auditor General investigation of IOGC to determine the extent to which it is fulfilling its stated goal and mandate of serving the best interests of First Nations as fiduciary and trustee.”

“It’s a bureaucratic system that’s not working for First Nations,” said IRC president Stephen Buffalo, whose organization represents 140 member Nations who have produced oil and gas in the past, are producing now or have the potential to produce.

The IRC was created in 1987 to “keep an eye” on the IOGC “to make sure it did its job,” says Larry Kaida, assistant to the president.

The IOGC was created in 1987 through an order-in-council by Cabinet as an agency within then-Indian Affairs and Northern Development Canada, mandated to manage and regulate oil and gas resources on First Nations communities. The IOGC now falls under the purview of the ISC.

Almost 10 years later, in 1996, an MOU was signed creating a co-management board for IOGC with representatives from IRC, the government, and industry.

“The objective in 1996 was to get First Nations inside IOGC to understand that business and prepare themselves for eventual take over,” said Kaida.

Through co-management, he says, First Nations would learn the business and come to understand what it is they wanted to do in the industry while IOGC remained in control through legislation and regulations.

The MOU offered a three-phase approach to that end-goal: it began with co-management, moved into delegation and then finally control. The long-term vision was to have member IRC First Nations direct and assume full control of the IOGC.

But the approach never moved beyond co-management and even that wasn’t true co-management, says Kaida, despite IRC having six members and the government two members.

“The board has always been very shy to make the decisions, because that comes with consequences and liabilities, so they defer decision-making to the IOGC,” he said.

On top of that, adds Kaida, the government-appointed board member has veto power as the board can’t make decisions outside of the regulations and legal constraints of the IOGC.

“As long as we continue to have that kind of relationship where IOGC is the ultimate decision maker, we’re going to continue having the same problems,” he said.

The lack of an industry representative on the board for quite some time is another illustration of the inability of the co-management approach to work. Kaida points out that the industry board position has become one of advisor because of liability issues, which includes Canada being unable to provide liability insurance for board members.

“If First Nations took over complete management of oil and gas, who’s going to pay for it if something risky happens on their lands?” said Kaida, pointing out that First Nations don’t have the “deep pockets” Canada does. “We need a backstop for these devolved activities.”

He said these concerns were very much the issue when the minister of the time recommended a pilot project the year after the MOU was signed. In that case, funding was made available for legal and other supports for five First Nations—four from Alberta and one from Saskatchewan—to take control of their resources.  Three years later, two of the Nations had dropped out of the pilot project.

“There was this fear: What was Canada exactly offloading on First Nations?” said Kaida.

The pilot project resulted in the First Nations Oil and Gas and Moneys Management Act (FNOGMMA) in 2006, which allowed First Nations to opt out of the Indian Act in order to manage and regulate on-reserve oil and gas activities or assume control of their capital and revenue trust moneys held by Canada.

Community support was needed for First Nations to enact FNOGMMA, but that didn’t happen on the oil and gas side.

“If First Nations opt into FNOGMMA, they would relieve Canada of their fiduciary duty over their oil and gas resources.  No First Nation is willing to jump from this deep end so far.  But FNOGMMA is still sitting on the shelf for any willing takers,” said Kaida.

In 2015, the IRC pushed for a formal review of the IOGC co-management board. It was the first formal review since the board’s inception.

In a confidential report acquired by Windspeaker.com, MNP, who conducted that review, concluded the co-management board was “not effective” as the IRC’s mandate was to support First Nations in their efforts to control their oil and gas resources, while the government portion of the board made decisions based on policy.

The MNP review pointed out that the “confrontational nature” of the co-management board made it impossible for it to meet the original intent and mandate of the MOU.

“This lack of effectiveness is exacerbated by the fact that board members and the larger stakeholder community have different views with respect to how Indian oil and gas resources can and should be managed,” read the report.

“Not a hell of a lot” has come from the findings of that review, says Kaida.

Now the IRC has one more criticism to add to its growing list against the IOGC. The June 30 resolution points to the IOGC’s failure to regulate industry clean-up of abandoned wells on First Nations land.

Last year, the federal government allotted $1.7 billion to deal with orphan and inactive wells as part of Canada’s coronavirus pandemic economic measures. That money flowed through the provinces of Alberta, Saskatchewan and British Columbia and none went directly to First Nations.

It was the IRC that negotiated an $85 million set aside from Alberta for site reclamation on First Nations land, said Buffalo.

The resolution calls for Indigenous Services Canada “to provide adequate funding resources to ensure that the well abandonment program that IRC initiated on behalf of its members is successful.”

Kaida says the mandate of IOGC must also be revisited to support First Nations who want to diversify into green energy.

“They've got a totally outdated mandate and we're calling on the minister to enable those changes within IOGC so they've got a modern mandate that takes into account the changes in the energy sector,” said Kaida.

Indigenous Services Minister Marc Miller did not respond to a request from Windspeaker.com to confirm the upcoming meeting or for information on how he would be moving forward on the issues outlined by IRC.