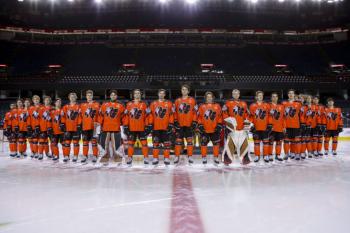 The Calgary Hitmen hosted a press conference for the Every Child Matters game at the Scotiabank Saddledome on Jan. 11. Photo by Jenn Pierce/Calgary Hitmen

“We’re obviously excited about the game. It has evolved into something quite special.” — Tyler White, the CEO of Siksika Health Services
By Sam Laskaris
Local Journalism Initiative Reporter
Windspeaker.com

The Calgary Hitmen of the Western Hockey League (WHL) are once again teaming up with Siksika Health Services to stage an Every Child Matters game.

This year’s match, the third one the Hitmen have staged, is scheduled for Sat. Feb. 4. The club’s provincial rivals, the Edmonton Oil Kings, will provide the opposition for the contest, which has an opening faceoff scheduled for 2 p.m. (MT).

“We’re obviously excited about the game,” said Tyler White, the CEO of Siksika Health Services.  “It has evolved into something quite special. It all started off by having the team come out to our community for a practice.”

That was back in January 2019 when members of the Hitmen hit the road for about a 60-minute drive from Calgary for a team practice at Siksika Nation.

The Hitmen then staged their inaugural Every Child Matters game in February 2020. A second game wasn’t able to be held until this past March, because there were various health and safety protocols in place during the COVID-19 pandemic.

The Every Child Matters contest has become one of the fixtures on the Hitmen schedule now.

The Calgary franchise has just three other regular themed games throughout its season.

They are the Be Brave game, a Teddy Bear Toss initiative and a Bret (Hitman) Hart match.

The Be Brave tilt is an opportunity to raise awareness of anti-bullying, the Teddy Bear Toss match sees fans bring stuffed teddy bears to the game, which are in turn donated to various local agencies, and the Bret (Hitman) Hart night, in honour of one of the team’s founding owners, is a fundraiser with proceeds going to a local prostate cancer centre.

The Every Child Matters game is an opportunity for the Hitmen organization to recognize and honour those who attended residential schools throughout Canada as well as their family members and residents from their communities.

White estimates between 2,000 and 3,000 Siksika Nation members will attend the game in person.

Those who are unable to take in the game in person can listen to the game on Windspeaker Radio as it will be broadcast in the Blackfoot language on 88.1 CJWE. Listen Live at https://www.cjwe.ca/player/

White praised Bert Crowfoot, the CEO of the Aboriginal Multi-Media Society of Alberta, which operates Windspeaker radio stations, for broadcasting the upcoming contest.

“He’s been a great supporter and interested in retaining the (Blackfoot) language,” White said of Crowfoot.

Traditional Blackfoot cuisine will be available for purchase at the game. Also, various representatives will be on hand to provide information on Blackfoot culture.

There will also be Indigenous traditional dancing showcased at the match.

“It hasn’t just been checking boxes and putting stickers on helmets,” White said of the Hitmen’s Every Child Matters games. “I believe we have created a bit of a standard for other Western Hockey League teams to follow. It transcends hockey. It’s not just about a hockey game. It’s an opportunity for us to promote and show some of the things that happen in our community.”

“It’s an important date to circle on the team’s calendar,” he said. “The team just gets bigger and stronger with our partnership with Siksika Nation.”

Moore said he is proud that the Calgary club was the first one in the 22-squad WHL to have an Every Child Matters game. Some others are now following suit.

“I know we were the initial team to create it,” Moore said. “I call that leadership.”

A ceremony was also held that day and all Hitmen players and members of the team staff participated in a cultural face paint session.

“It was an amazing cultural opportunity for our guys,” Moore said.