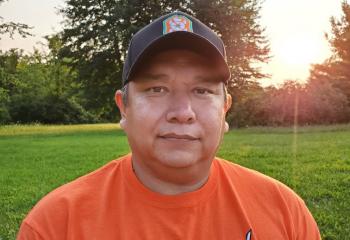 Vince Longboat says he’s not quite sure what he’s getting himself into, but the veteran lacrosse coach is thrilled with his latest appointment.

Longboat, a member of Seneca Nation who lives in the Six Nations community of Ohsweken, was named head coach of the Brock University men’s field lacrosse team last week.

The Brock Badgers, which are based in the Ontario city of St. Catharines, participate in the 14-team Canadian University Field Lacrosse Association (CUFLA).

This league, which plays a fall schedule, usually features a dozen entrants from Ontario and two from Quebec, but in the 2021 CUFLA season Quebec may just have one team. That’s because Montreal’s McGill University sent out a press release on Wednesday indicating many of its school teams, including the men’s lacrosse squad, would not be taking part in their upcoming seasons because of various challenges posed by the COVID-19 pandemic.

The pandemic wiped out the entire 2020 CUFLA campaign.

Since his hiring this past week, Longboat has been trying to connect with as many possible Brock returnees.

“I don’t know who is returning from the roster from the last year the team played (in 2019),” he said.

And he also has no clue which first-year Brock students are interested in vying for spots on the Badgers’ squad since he was not involved with any recruiting efforts.

“It’s going to be a fresh start for everybody,” he said.

Longboat, however, believes the Badgers are capable of enjoying plenty of success this fall, much like they did in 2019 when they posted a perfect 10-0 record in regular season action.

Brock’s quest for a perfect season, however, ended when it was edged 9-8 by Peterborough’s Trent University in a CUFLA semi-final match.

“I’ve done some research on the guys that I would hope would be on the team,” Longboat said. “If the guys that are eligible do come back, I think we would do pretty well.”

Longboat is unsure how many Indigenous players will be in the Badgers’ lineup this year.

“There’s going to be a couple I would think,” he said.

He’s also hoping the fact he is now coaching at the university will persuade other Indigenous players to consider Brock in the future.

“I hope so,” he said. “That’s the hope – that I can get some guys to come down and show their skills down there.”

Longboat began his coaching career slightly more than two decades ago when he joined the staff of a Six Nations intermediate boys’ squad, featuring two of his younger brothers.

Since then he has coached numerous Six Nations’ youth box and field lacrosse clubs.

Longboat’s coaching responsibilities with Brock will not interfere with another one of his gigs, serving as an assistant coach with the Six Nations Snipers of the Arena Lacrosse League (ALL).

The ALL, which traditionally begins its season in December and continues into April, is considered a developmental feeder circuit for the National Lacrosse League (NLL), the world’s premier box lacrosse loop.

“There’s no conflicts with the Brock stuff,” said Longboat, who is heading into his fourth year with the Snipers.

Longboat also has another plum coaching assignment. He’s been named an assistant coach for the Iroquois Nationals that will participate at the world men’s under-21 tournament in Ireland next year.

Longboat, who works in the engineering field for the Six Nations Council, also doesn’t anticipate any scheduling conflicts with his work and Brock coaching responsibilities.

He said most Badgers’ practices, which will be staged three times per week, will begin at 7 p.m.

That will give him more than enough time to complete his regular work day and then commute to St. Catharines, a 45-minute drive if there’s limited traffic, to run a Brock practice.

Brock’s athletic director Melissa Krist is thrilled the school was able to bring in Longboat as the Badgers’ new coach.

“Vince cultivates character, leadership and sportsmanship,” Krist said. “And we look forward to the positive influence he'll have on the growth of our student athletes.”

Though he’s thrilled he will now get the opportunity to coach in the university ranks, Longboat can only wonder how far his coaching career will take him.

But that’s not to say he doesn’t dream of coaching in the NLL some day.

“At that level they pursue you,” Longboat said, adding representatives of pro franchises are aware of feats and accomplishments coaches achieve at other levels. “You don’t pursue it. I’m happy to be part of Brock. If there’s nothing past Brock for me, that’s great too.”