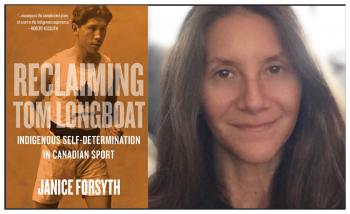 The Tom Longboat Awards “are an important part of Canada’s cultural heritage that goes well beyond the realm of sport and into the politics of being Indigenous in a settler state.” — Author Janice Forsyth
By Sam Laskaris
Local Journalism Initiative Reporter
Windspeaker.com

In 2000, Janice Forsyth was working as the interim project manager for the Aboriginal Sport Circle (ASC).

Besides being employed by the governing body for Indigenous sports in Canada back then, Forsyth also started working towards her PhD from Western University in London, Ont.

As part of her dissertation, Forsyth offered to help the ASC produce a list of all the winners of Tom Longboat Awards dating back to their inception in 1951. The awards, which recognized Indigenous athletic excellence in Canada, are annually presented to regional and then national winners.

Now, two decades after she commenced her research, Forsyth, a member of Fisher River Cree Nation in Manitoba, has taken some information from her findings and transformed it into a thought-provoking book titled Reclaiming Tom Longboat: Indigenous Self-Determination In Canadian Sport.

“I hope this book sticks and resonates with people,” said Forsyth, a former ASC president who continues to serve as a director for the association’s board. She is also the director of Indigenous Studies in the Faculty of Social Science at Western University and an associate sociology professor at the university.

Forsyth writes at length about Longboat, the Onondaga runner from Six Nations who was one of the world’s top long-distance runners in the early 1900s. He represented Canada in the marathon event at the 1908 Summer Olympics in London, England.

Forsyth’s book also covers the history of the awards named in his honour, accolades that were presented by various organizations before the ASC started handing them out in 1998.

In her book Forsyth details that the different groups who were in charge of the awards were not necessarily simply looking to recognize Indigenous athletic greatness. In some cases, they were looking to further their own political agendas.

“I begin this cultural history with the premise that the Tom Longboat Awards are much more than a celebration of athletic excellence,” Forsyth wrote. “Rather, they are an important part of Canada’s cultural heritage that goes well beyond the realm of sport and into the politics of being Indigenous in a settler state.

“To understand the awards as an uncritical and celebratory aspect of sport devalues what they mean symbolically to the nation, and especially to Indigenous people. It is more productive, and definitely more interesting, to understand them in the context of Canadian colonialism, where sport was (and remains) a complex space in which individuals and groups struggled with and against settler domination. At its core, then, the history of the awards is a history of assimilation and self-determination told through the lens of sport.”

Forsyth said researching and writing her book was an extremely challenging process. Her investigative work included digging up information on attempts to civilize Indigenous people, including horrifying tales from the residential school system.

Both her grandmother and grandfather attended the Brandon Indian Residential School in Manitoba.

“It was an emotional rollercoaster for me,” Forsyth said about writing her book.

She was hopeful from the beginning that her idea to research the Tom Longboat Awards would eventually result in a book.

“I think that goes through the head of everybody who writes a thesis that their work will be published into a book,” she said. “But my focus at the time was to produce a report that was useful for the Aboriginal Sport Circle.”

Forsyth said her vision of turning her research into a book gathered steam in 2015 when the Truth and Reconciliation Commission of Canada concluded its investigation into the residential school system.

Forsyth was not content with the findings in the more than 4,000-page report and the ensuing 94 Calls To Action.

“I felt the report hadn’t gone far enough to try to understand sports in the residential school system,” she said.

Countless hours of writing and rewriting resulted in Forsyth’s final product, a book that was released last month on Tom Longboat Day in Ontario.

“It was really a five-year long process to rethink my research,” she said.

While detailing how Indigenous people, athletes and sports have been neglected and abused over the years in Canada, Forsyth’s book recognizes there is potential for change. And sports can play a key role in decolonization and Indigenous self-determination.

“It’s good this book is part of this larger discussion,” she said.