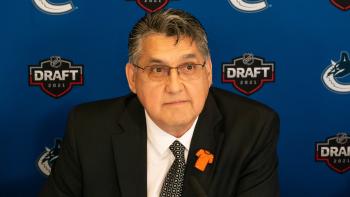 Ron Delorme will have a close-up look at some future pro hockey stars.

Delorme, who has Cree ancestry, is a former NHL player himself. Since 1986, however, he has been serving as an amateur scout with the Vancouver Canucks, one of the two NHL franchises he played for.

Delorme though will step behind the bench and serve as one of the coaches for the Canadian Hockey League’s Top Prospects Game, which is scheduled for Jan. 25 at the Langley Events Centre in B.C.

The contest will feature many of the junior players expected to be among the early selections at the 2023 NHL Entry Draft, set for June 28 and June 29 in Nashville.

Besides spending four seasons, from 1981 to 1985 playing for the Canucks, Delorme also toiled for the previous five years in the NHL with the Colorado Rockies.

Others who have been selected to coach in the Top Prospects Game include Canucks’ legends Stan Smyl and twins Daniel and Henrik Sedin.

Testing program to include Indigenous focus

A national program that helps identify some of Canada’s top sports performers will now include a focus on Indigenous athletes.

Officials from the RBC Training Ground, a talent identification and athlete funding program designed to find young athletes with Olympic potential, announced their 2023 plans on Jan. 10.

For starters, there will be 17 free qualifying events across the country for those ages 14 to 25.

There will also be testing events for members of some provincial squads before they compete at the North American Indigenous Games (NAIG) this summer in Nova Scotia.

The RBC Training Ground was launched in 2016. Since then about 12,000 athletes across the country have been tested and more than 1,600 of them have been identified as having Olympic potential by various national sport organizations.

Athletes are judged based on various speed, strength, power and endurance benchmark tests.

Some of the most elite athletes identified will be chosen as RBC Future Olympians and will receive funding, mentorship and other resources.

“We recognize that Indigenous athletes in Canada experience barriers to participating in sport,” Cole said. “We hope that by bringing RBC Training Ground to regional NAIG events, we're making it easier for Indigenous athletes to chase their Olympic dreams.”

Nathan Lickers is among those hoping to dance to a better finish at this year’s national figure skating championships.

Lickers, a member of Six Nations in Ontario, is competing with his partner Lily Hansen in the senior ice dance category at this week’s Canadian meet held in Oshawa, Ont.

The nationals began on Jan. 9 and continue until this Sunday, Jan. 15.

Lickers and Hansen, who is from London, Ont., are both 21. This marks the 11th season they have been skating together. They represent the Ilderton Skating Club.

Lickers and Hensen placed ninth at their first Canadian senior nationals at the 2022 meet held in Ottawa.

As for this year, there are a total of 12 teams entered in the senior ice dance category. Teams will perform their rhythm dance on Jan. 13 followed by their free dance routines on Jan. 14.

Six Nations’ Randy Staats has been on fire in the early portions of the National Lacrosse League (NLL) season.

One has to look up—way up—to the top of the NLL scoring leaders to see how Staats is faring.

He’s currently leading all league scorers having racked up 33 points (10 goals and 23 assists) in his first four games with the Halifax Thunderbirds.

Staats, 30, has long been considered one of the top offensive players in the sport. But there was some question how he would perform this season as he was coming off the third knee surgery of his career.

The Thunderbirds acquired Staats in a trade this past August with the Texas-based Panther City Lacrosse Club. He didn’t play a game last season with Panther City while recuperating from his latest surgery.

As for this season, Staats kicked things off with a seven-point performance during Halifax’s 18-8 victory over the Philadelphia Wings back on Dec. 2.

Staats had a season-high 10-point effort in the Thunderbirds’ 14-11 triumph over the Albany FireWolves this past Saturday.