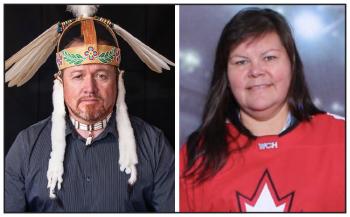 “We wanted to make that announcement during the March Break when everybody is reflecting on where we should be and where we used to be three years ago at this time of year, which is very big in the Indigenous world of community get-togethers.” —Nipissing First Nation Chief Scott McLeod
By Sam Laskaris
Local Journalism Initiative Reporter
Windspeaker.com

That certainly describes officials and volunteers from Nipissing First Nation.

They’ve been trying to host Ontario’s largest Indigenous youth hockey tournament since 2020. But the event, the Little Native Hockey League tournament, which is often simply referred to as the Little NHL, has been cancelled in each of the past three years because of the pandemic.

It was announced, however, on Wednesday (March 16), that the First Nation based in northern Ontario has decided that it host the 2023 version of the tourney.

That event, which is traditionally held the week of March Break to allow participants and their families to travel from across the province to take part, will be held in Mississauga.

“It’s obviously been a bit of a rollercoaster ride trying to prepare for something with so many unforeseen challenges that we were faced with,” said Nipissing First Nation Chief Scott McLeod. “But I can’t commend our volunteers and staff enough for sticking in and wanting to continue hosting.”

The 2022 tournament was officially cancelled in mid-January.

“It’s been kind of a heartbreak after heartbreak for them and still they came back 100 per cent behind it wanting to do it again,” McLeod said of the Nipissing host committee members. “I’m pretty happy and proud of my community for doing that.”

McLeod said community reps were fairly confident the 2022 event would be cancelled this past December, in large part because of the rising number of COVID-19 cases in the province, primarily due to the Omicron variant.

“The writing was on the wall before Christmas that things were not going to get better going into the new year,” McLeod said. “And we figured rather than going into the Christmas holidays fielding a bunch of calls and having to do work with sponsors, that we’d give it until we got back in the new year to make that final decision. But it was kind of evident it was going to be cancelled again.”

Though COVID cases in Ontario have been declining in recent weeks, McLeod is content with the decision that was made a couple of months ago to cancel this year’s tournament.

“In retrospect, we made the right decision back then,” he said.

Little NHL officials gave Nipissing the right of first refusal on whether it wanted to host next year’s event.

But McLeod said that wasn’t a decision his community was eager to make in January.

“We told them at that time we’re not going to talk about hosting it again in 2023 at this point,” he said. “We needed a bit of breathing room to kind of get over another cancellation and just regroup as a community committee that looks at volunteering and working on this project.

“We gave a few weeks for the committee to reflect and see where their heads were as far as continuing on. They came back to us shortly thereafter saying, ‘You know what, we’re good to go.’”

McLeod said one key member of the host committee will not be able to continue but only because she has taken on another administrative role with the First Nation that doesn’t allow her the freedom to work on her tournament hosting responsibilities as much.

McLeod said it was important to go public with news of the 2023 tourney this week.

“We wanted to make that announcement during the March Break when everybody is reflecting on where we should be and where we used to be three years ago at this time of year, which is very big in the Indigenous world of community get-togethers,” he said. “I’ve always compared it to being as big as Christmas for Indigenous folks.”

McLeod was thrilled he was able to share some positive news.

“Coming out of a dark period in history I think this is a good announcement,” he said. “We’re back on track. We’re resilient and we’re moving ahead to host a bigger and better event in 2023.”

In recent times the Little NHL had been averaging more than 200 participating clubs each year.

Little NHL president Marian Jacko said the tournament executive is thrilled with the news of next year’s event.

“Hosting this tournament for the first time after three consecutive cancellations is something we are all looking forward to,” she said. “We know how important this event is for First Nations across the province and we look forward to working with Nipissing’s team to host an incredible experience in 2023.”