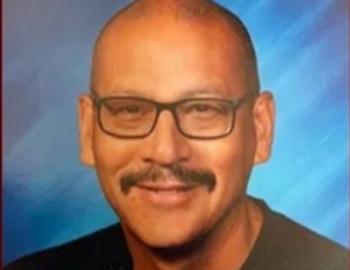 “No offence to any hall of fame but this is just another way that we can recognize and acknowledge Indigenous athletics.” — Dan Ninham, executive director of the North American Indigenous Athletics Hall of Fame
By Sam Laskaris
Local Journalism Initiative Reporter
Windspeaker.com

Dan Ninham is excited about his newest venture.

Ninham, a retired teacher who lives in Red Lake, Minnesota, is hoping to generate as much interest as possible about it.

He is starting up and will serve as the executive director of the North American Indigenous Athletics Hall of Fame.

For now, the hall will be a digital one, housed on the website of Minnesota’s Red Lake Nation College.

Though he retired from public school teaching in June 2020, Ninham continues to teach an Anishinaabe nutrition and fitness course at the college.

Ninham is not looking to compete against the American Indian Athletics Hall of Fame, which is located at Haskell Indian Nations University in Lawrence, Kansas.

His great grandfather Martin Wheelock, a former football star, was inducted into that hall of fame in 1980. The existing hall, which was incorporated back in 1972, has more than 100 inductees.

Ninham, however, believes there are far many more individuals, including several dozen from Canada, who deserve to be in an Indigenous sporting hall of fame.

“No offence to any hall of fame but this is just another way that we can recognize and acknowledge Indigenous athletics,” he said.

The idea of launching a new hall of fame is not relatively new to Ninham.

Ninham, a freelance writer whose work has appeared in various publications, has written about many of those he believes are worthy of a hall of fame induction.

He has compiled a list of about 150 individuals and teams he believes belong in his.

He’s hoping to induct as many of those as possible this year. He’s expected to release the list of inaugural inductees on Feb. 1.

Members of the public have until Jan. 21 to get in touch with Ninham if they believe they have someone worthy of induction.

Those looking to suggest a nominee or for more information about the hall can contact Ninham at dan.ninham@rlnc.edu

Ninham said he anticipates the majority of those who fulfil the criteria and fill out an application will be inducted into his hall of fame.

“In our Indigenous thinking and our cultural behaviors, you recognize the ones that came before us,” he said, adding those who achieve success regionally, nationally or internationally deserve to be recognized.

Ninham, however, is not simply looking to induct as many individuals as possible with no questions asked.

In fact, he’s looking to have some sort of communication with possible inductees, or with a family member if someone is now deceased.

“That shows credibility when you communicate with those people,” he said.

The North American Indigenous Athletics Hall of Fame will induct individuals or teams through six categories. All inductees must have Indigenous ancestry. And all members of those entering via the Team category must be Indigenous.

The half dozen induction categories are Athlete, Coach, Team, Builder, Media and Official.

Though his list of potential inductees includes about 150 names now, Ninham said he is not setting a target of how many to induct in 2022 or in future years.

He’s just happy that his hall of fame will soon become a reality.

Ninham realizes having a hall of fame in an actual building would be a costly initiative.

While conducting research for his project, he came across another virtual hall of fame.

“That would be more feasible,” he said. “In our day and age of technology, that will probably be the area that we would look for, having a virtual facility.”

When the hall of fame website is up and running, Ninham is hoping to include a bio for each inductee. Displays including photos of sporting accomplishments, can accompany the inductees.

“This is the start," he said. "And there’s always a start of something.”

Ninham added he thought of having an in-person ceremony, perhaps in Minneapolis, to honour the inaugural class of inductees this year.

But the ongoing pandemic forced him to nix that idea this year.

“I’m confident I could find the money to do that,” he said of staging an in-person event at some other point. “For future years, that could happen.”