Métis player eyeing the possibilities for next tier hockey 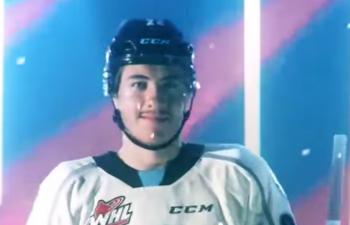 Jakin Smallwood of the Winnipeg ICE of the WHL.

Jakin Smallwood is in his final season of junior hockey eligibility and currently starring in the Western Hockey League (WHL) with the Winnipeg ICE.

Smallwood, who has Métis ancestry through his father, turns 21 on Jan. 21. He plans to continue playing beyond this season but, at this point, he’d like to focus on his current campaign and not on whether he’ll be toiling in the Canadian university ranks or pursuing a pro hockey career in North America or overseas.

Smallwood, who is from Leduc, Alta., is having an impressive season with the ICE.

As of Monday, Jan. 3, he was averaging more than a point per outing through 34 games and had already achieved junior career highs for goals (15), assists (23) and points (38).

The ICE is not only emerging victorious in more than its share of games. The Winnipeg squad, which has registered a 27-5-2-0 mark in its first 34 contests, is also sitting atop the over-all standings in the 22-team WHL.

Smallwood, a 6-foot, 190-pound right winger, is in his fourth WHL season.

He has been with the ICE franchise all four seasons. The organization was previously based in British Columbia and called the Kootenay ICE, before relocating to Winnipeg for the 2019-20 season.

Smallwood played for the squad in Canada’s most westerly province during his rookie season before moving with the club to Manitoba.

In terms of points, prior to this season, Smallwood had collected his highest number of points, 30, during his first WHL campaign.

He followed that up with a 23-point season in year two. And in last year’s pandemic-shortened season he had 22 points, albeit in a 24-game schedule.

As for this year, Smallwood has spent the entire season seeing plenty of action. He’s considered one of Winnipeg’s top six forwards, translating into his share of ice time on the club’s top two lines.

He spent the majority of the early portions of the season on a line with Connor McClennon and Mikey Milne, who sit second and third, respectively in ICE scoring.

Smallwood, fourth in Winnipeg scoring, has had various other linemates, however, in recent weeks.

As for next season, should he choose to go that route, Smallwood could find himself competing in the Canadian university ranks.

“A couple of teams have contacted me,” he said, adding Alberta-based schools have shown interest in his services.

Smallwood added he is not counting out the possibility of playing pro hockey somewhere.

“There’s no interest yet,” he said from any pro franchises.

But that could change in the coming months, especially if the ICE continue to enjoy success and have a lengthy post-season run.

“I’m going to play out the year and then weigh out my options,” he said.

Smallwood is hoping his playing opportunities could be expanding tremendously in the near future. That’s because his mother has German ancestry and he has applied to become a German citizen.

But he has no idea when that process will be completed, adding his Toronto-based agent Andrew Maloney, who works for Maloney & Thompson Sports Management, is handling some of the required paperwork.

Smallwood said obtaining his German citizenship would expand potential European playing options as he would not be considered an import player in various leagues throughout the continent.

Many European circuits have a maximum on the number of North American players teams can have on their rosters.

Smallwood realizes he still has room for improvement to play at the next level.

Though he’s proud of his Métis ancestry, Smallwood said it was only about five years ago that his father first mentioned it to him.

“It’s just cool you have Métis in your life,” Smallwood said.

Smallwood said he has played in two Indigenous hockey tournaments since he found out he would be eligible to compete.

Shortly after learning about his background, he participated in a provincial Indigenous youth tournament in Alberta.

He also suited up for the Saskatchewan-based Canoe Lake Young Guns who won the championship final at the Fred Sasakamoose (Chief Thunderstick) National Hockey Championship, an Indigenous men’s tournament held this past August in Saskatoon.

Smallwood has been invited to play with the Young Guns again this season. But he’s not sure whether he will be available for duty for that event, which will be held May 19 to May 22 in Saskatoon.