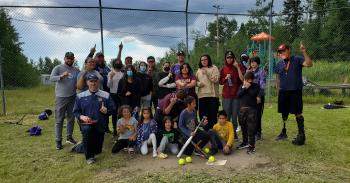 Members of the Kam River Fighting Walleye staff are gearing up for their upcoming hockey season.

But three staff members of the Junior A hockey squad, which is based in Thunder Bay, Ont., took time out of their summer schedules in late July to lead a softball skills camp in Sandy Lake First Nation.

The First Nation in northwestern Ontario is about a 90-minute flight from Thunder Bay.

About 25 youth from the First Nation, ages eight to 17, participated in the two-day camp, which concluded on July 27.

The camp was organized by the Mikinakoos Children’s Fund, a charity that helps provide food, clothing and shelter to children in remote First Nations communities.

The Canadian government provided a grant to the fund so it could host events like the Sandy Lake baseball camp.

The Fighting Walleye staff members who travelled to Sandy Lake were brothers, Kevin and Kurtis McCallum, and Colin Sobey.

Kevin McCallum is the general manager and director of player personnel for the Fighting Walleye, who compete in the Superior International Junior Hockey League.

He said the club had previously booked, through the Mikinakoos Children’s Fund, several hockey camps at various First Nations in northern Ontario this past year. But he said all of those events were cancelled because of the ongoing COVID-19 pandemic.

Kevin said Emily Shandruk, the executive director at Mikinakoos Children’s Fund, was still keen to work with reps of the hockey team.

“Emily knew we had a bit of a background in baseball,” said Kevin. “My brother and I both played college baseball. So, towards the end of the winter she contacted us and asked if we could do a baseball camp instead of a hockey one.”

Kurtis McCallum, who is a hockey operations assistant for the Fighting Walleye, began his baseball collegiate career at Mesabi Range College in Minnesota. He later transferred to Mayville State University in North Dakota.

As for Sobey, a member of Red Rock Indian Band in northern Ontario, he’s earned his share of baseball accolades over the years in various Thunder Bay area leagues.

Sobey is also the diversity and inclusion director for the Fighting Walleye.

Kevin McCallum said the Kam River reps were brought in to help teach some basic skills to the Sandy Lake youth.

“We were just trying to get them excited about the game,” he said.

Though Fighting Walleye reps were only in the community a couple of days, Kevin said they noticed improvement from the camp participants.

“It was awesome seeing kids have small successes,” he said.

He said the Kam River officials heard there had been a suicide in the Sandy Lake community shortly after their arrival.

That’s why he believes it was important for some youth from First Nation to take part in the sports camp.

“Hearing the laughter was great,” Kevin said. “Laughter is the universal sign of people having a good time. It was nice to see the kids come out and have some fun.”

He said plans to stage another softball camp this summer at another First Nation in northern Ontario have fallen through.

But he’s hopeful the Fighting Walleye will be able to stage hockey camps in various First Nation communities during the 2022-23 hockey season.

Shandruk was thrilled that the recent softball camp was staged.

“We’re so excited these amazing kids in Sandy Lake had the opportunity to further develop their athletic skills, which we know helps build self-esteem in young people,” she said. “We’ve been eager to run a training camp like this for a while and are thrilled it was able to finally take place.”

The Canadian government helped fund the camp through its Sport for Social Development in Indigenous Communities initiative.

“I am thrilled to know that young people are thriving while playing baseball in their community,” said Pascale St-Onge, the minister of Sport. “The Sandy Lake First Nation skills camp will help them gain confidence and develop leadership qualities.”