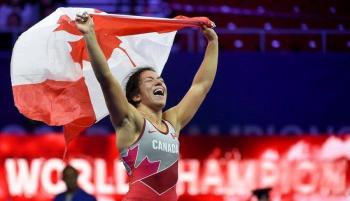 “I would love to be in a gold-medal final. As many high-pressure finals I can be in, that’s going to help me because that’s what my goal is for the worlds, to be in the finals, to win the finals.” — Justina Di Stasio
By Sam Laskaris
Local Journalism Initiative Reporter
Windspeaker.com

But before the 29-year-old, a member of Norway House Cree Nation in Manitoba, can devote her thoughts to her education career, she still has some athletic goals she’d like to reach.

Di Stasio, who lives in Burnaby, B.C., is an elite wrestler. She’s been a member of the Burnaby Mountain Wrestling Club since September of 2010.

This past week she was one of 12 grapplers named to the Canadian roster for this year’s Commonwealth Games, which are scheduled to be held from July 28 through Aug. 8 in Birmingham, England.

Di Stasio, who competes in the women’s 76-kilogram category, already has an impressive wrestling resume.

And, she plans to continue wrestling for a couple more years with hopes of representing Canada at the 2024 Summer Olympics in Paris, France.

“I’m hoping to get to the Olympics and then I can see what else I can do,” Di Stasio said. “I have my teaching career all set up, but I really want to go to the Olympics first.”

Di Stasio works as a substitute teacher in Coquitlam, BC.

“I’m a substitute so I can pick when I can go in, which is great,” she said. “It’s kind of stressful though because I want to have my teaching contract continue the next year. But because wrestling takes over so much time, I think this summer I’m going to have to figure out if they’re going to keep me on or whether I’m going to have to apply for a different district that requires less days per year.”

The Coquitlam-based school board Di Stasio is currently employed by requires substitute teachers to take on shifts equaling about half of the days in the school year. Another area school board, however, requests that substitutes work a minimum of just 10 days per school year.

Since she aspires to compete at the Olympics in a couple of years, Di Stasio is uncertain at this point how many days she’ll be able to work so that it doesn’t interfere with her training and competition schedules.

And she needs to stay healthy, which has been a bit of a challenge in recent years.

“I continually get bone chips in my ankles,” Di Stasio said. “I don’t know why. (The doctors) don’t know why. But when I roll them, a few weeks later there will be something stuck and it’s usually a bone chip.”

Di Stasio has had three surgeries—two on her right foot and one on her left—to treat this issue.

“So, I do a lot of mobility now through them to try to keep them as healthy as possible,” she said of her ankles. “My body is good now, which is nice.”

Di Stasio was to travel to Rome this past week to take part in an Italian meet. But she believes she caught a bug from her Kindergarten students and was forced to stay home.

She’s now hoping to participate in the Spanish Grand Prix in mid-July, and keen to compete at a tournament in Tunisia before heading off to the Commonwealth Games.

Then there’s this year’s world championships, which will be held in Belgrade, Serbia in mid-September.

“Everything is helping me to perform at the world championships,” Di Stasio said of her upcoming meets.

“Commonwealth Games is huge and I hope I win. I would love to win. But I also hope to work on whatever little holes we find in those two prep tournaments leading into Commonwealth Games and then hopefully execute the changes I have to make.”

She wants some hardware from the Commonwealth Games.

Athletes from 72 countries are expected to take part in Birmingham. But Di Stasio is not sure how many entrants there will be in her weight category.