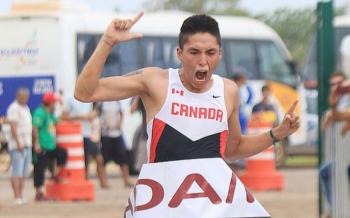 “It’s quite an honour. It’s humbling not only to put myself on the map but also to represent Indigenous people on the program.” — Rilee ManyBears
By Sam Laskaris
Local Journalism Initiative Reporter
Windspeaker.com

In an ideal world Indigenous long-distance runner Rilee ManyBears would have been in Tokyo this summer representing Canada at the 2020 Summer Olympics.

ManyBears, a member of Siksika Nation in Alberta, had hoped to compete in the men’s 10,000-metre race at this year’s Games, which were postponed due to the pandemic.

The current plan is to host the Olympics next summer in Japan. It remains to be seen, however, what state the world will be in a year from now and whether health restrictions and international travel will allow the Games to proceed.

While ManyBears’ Olympic aspirations are up in the air right now, he knows for a fact he will be a part of another prestigious event this year.

The 24-year-old has been named a Sports Celebrity Ambassador for motionball, an annual event that raises funds and awareness for the Special Olympics Canada Foundation.

But due to the pandemic, this year there will be a motionball Virtual Marathon of Sport held on Sept. 26.

“It’s quite an honour,” ManyBears said. “It’s humbling not only to put myself on the map but also to represent Indigenous people on the program.”

ManyBears is not quite certain all of the duties he will be fulfilling as an ambassador. One of the first things he has been asked to do is to make a short video, asking Special Olympics athletes to learn a new skill or activity.

“I wouldn’t mind adding some Indigenous activities to it,” he said. “I’m pretty sure they would like that.”

Though he won’t be participating in the Olympics this year, ManyBears is still holding out hope he will get to take part in another prestigious competition, the Indigenous World Games this November.

ManyBears has experienced some success in the two previous editions of these Games.

He captured a gold medal in the men’s 8,000-metre race at the inaugural Games held in 2015 in Brazil.

To improve his chances of becoming an Olympian, ManyBears moved to Kenya in late 2018 so he could train with elite athletes from that country. He stayed for almost five months before returning home.

“I met some amazing people in Kenya,” ManyBears said. “And they believed in me.”

ManyBears had also hoped to travel to Kenya so he could train for a few months earlier this year.

But the pandemic nixed those plans and cancelled the Canadian Olympic track and field trials, which had been scheduled for late May in Burnaby, B.C.

Canada’s track and field participants for the Tokyo Games would have been selected following the completion of these trials.

“I’m not upset about everything being cancelled,” ManyBears said. “Growing up there were some opportunities that didn’t happen for me either.”

ManyBears is trying to take current world happenings in stride. And that’s even though he is not sure if the Tokyo Olympics will indeed proceed in 2021.

“I’m keeping in shape,” he said. “You never know though where this (pandemic) goes. Even if the Olympics are not next year I’m still young and will compete in other years.”

ManyBears is remaining active these days by going for what he deems “a light jog” of about 15 kilometres per day, six days a week.

“Right now I’m keeping fit and staying active,” he said. “For a couple of weeks I had been enjoying the junk food.”

ManyBears has also spent the past five years working as a youth worker for Siksika Health Services.

The pandemic has forced him to take on some different responsibilities this year.

“I’m a jack of all trades right now,” he said. “I thought I’d do what I could for my First Nation.”

ManyBears’ duties with his First Nation have varied. At times he’s been asked to operate its COVID-19 information line. He’s also helped to deliver food hampers to Siksika Nation members.

In 2016 he became the first Siksika Nation runner to complete the renowned Boston Marathon.

He decided to go ahead and take part in that event even though he had heart surgery three weeks earlier.

ManyBears discovered during the summer of 2015 that he had Wolff-Parkinson White Syndrome. This condition causes one to have a rapid heartbeat.

After his diagnosis, ManyBears still ended up winning his race at the 2015 World Indigenous Games.

And after a corrective heart procedure in March of 2016, he finished the Boston Marathon the next month.