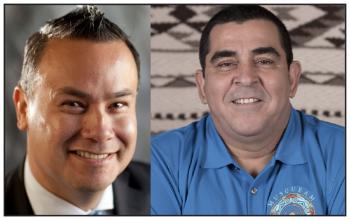 “Never before have communities and the public been invited into the dialogue and into the conversation this early in this phase of a project.” — Lara Mussell Savage, chief of Skwah First Nation
By Sam Laskaris
Local Journalism Initiative Reporter
Windspeaker.com

The ‘How’ has been revealed, but the ‘How much’ is not expected to be revealed until next month.

At a news conference held in Whistler on June 14, details were released on how the concept of hosting an Indigenous-led Olympic and Paralympic Games in 2030 in British Columbia would unfold.

The concept is led by the leadership of four First Nations—Lilwat, Musqueam, Squamish and Tsleil-Waututh.

“We recognize that costs are top of everyone’s minds,” said Chris Dornan, a spokesperson for the COC and CPC bid feasibility team. “And we expect to give you specific costs by mid-July. But today is about vision and it’s about concept.”

The plan is to primarily utilize existing venues—some upgrades will be required— if the 2030 Games are indeed awarded to British Columbia.

It was also revealed the Sun Peaks Ski Resort, located near Kamloops, about a five-hour drive from Vancouver, is being touted as a venue site where snowboard and freestyle skiing events would be staged.

Also announced was the fact the International Olympic Committee (IOC) is keen to have the 2030 events be the first positive climate Games, with organizers responsible for implementing zero-carbon solutions for all Games' activities. Reps from the B.C. bid have indicated their willingness to work with and follow all climate plans to achieve this goal.

Tuesday’s press conference marked the official end of the feasibility phase of the bid, which was held to determine whether major sporting events, in this case the 2030 Olympic and Paralympic Games, could be Indigenous-led with the help of supporting partners.

The next phase, which is engagement, has now commenced. Those who joined forces to put together the hosting concept are now ready to get some feedback. They are ready to hear from members of the public and to discuss their project ideas in more detail with vital stakeholders at the local, regional and national levels.

A website, available in both English and French, can be viewed at A Future Games | Games Engagement

Vancouver hosted the 2010 Winter Olympics and Winter Paralympics. Though there was some Indigenous inclusion in those Games, Tewanee Joseph, who spearheaded the Indigenous partnerships for the bid feasibility team, said things would be drastically different for 2030.

That’s because Indigenous people would have an equal voice at the table.

“For many generations our peoples have always been on the outside looking in and trying to get inside the house to have a conversation,” said Joseph, a member of Squamish Nation. “And that’s what is different about 2030. This process is all about all of the Nations all sitting together with the leaders from the municipalities but also from the Canadian Olympic Committee and Canadian Paralympic Committee.

“And that’s never happened in history. It didn’t happen in 2010. But it’s happening now.”

She’s thrilled that individuals across the country will now be able to offer their thoughts on the proposed bid via the engagement process.

“The power of an invitation, bringing this work together, is now taking it a step further and asking all Canadians to participate and being a part of a conversation,” Mussell Savage said. “That is an Indigenous-led and Indigenous way of going about this project.”

Like Joseph, she said the engagement process is precedent setting.

“Never before have communities and the public been invited into the dialogue and into the conversation this early in this phase of a project,” Mussell Savage said, adding some engagement has already taken place within the Nations, talking to their memberships about the project, the priorities and needs and concerns.

Wayne Sparrow, the chief of Musqueam First Nation, said various First Nations worked with numerous partners during the feasibility stage to determine whether hosting the two Games in 2030 would be possible and what Indigenous-led efforts would look like.

“With the release of the Games concept, we can finally begin to share that we are ready to welcome the world back to our territory and create new paths towards reconciliation through sport,” Sparrow said.

“Now it is time to speak to our communities and, indeed, the Canadian public as we seek feedback on the more detailed proposal,” Williams said.

“In keeping with the traditions of our Nations, the communities will have an opportunity to add their voice to the discussion and help the Leadership Assembly as we move closer to a decision.”

COC president Tricia Smith said the Indigenous-led efforts this far have been a unifying force.

“Sport brings us together and this project can be an example of reconciliation and how we can work together to make us all better,” she said.

Gail Hamamoto, the CPC vice-president, is also eager to see what lies ahead.

“An Indigenous-led host Games in 2030 would be fully inclusive and mark an exciting new stage of growth for the Paralympic movement in Canada, providing robust, quality opportunities to grow Para sport in B.C. and across the country with lasting legacies in sport participation for people with a disability, high performance development, and awareness of Paralympic sport,” she said. “We look forward to continuing the Games concept work with all partners and engaging in further discussions throughout the next phase.”

The IOC is expected to announce in May of 2023 which country will be awarded the 2030 Games.