Indigenous curler, artist puts his stamp on a broom 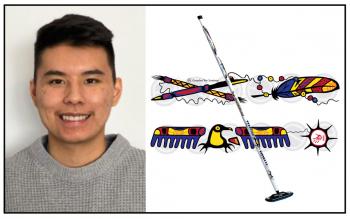 “We want to create a sport that is safer, more respectful and compassionate to anyone who wants to participate.” — Erin Flowers, the director, public relations at Goldline Curling
By Adam Laskaris
Windspeaker.com Contributor

Curling is known for many things. It’s a social game of speed, technical skill, and sweeping ability. It’s played in every province and territory across Canada. And it’s always an exciting affair when teams compete at the highest levels.

It’s not, however, known for attracting great numbers of competitors from BIPOC (Black, Indigenous or People of Colour) populations.

“I always thought of myself as the only Indigenous player out there,” said Greyden Yee Louison, a 20-year-old Cree/ Saulteaux curler and artist from Kahkewistahaw First Nation #72, located near Broadview, Sask. “From playing for many years, I just got used to that feeling.”

Yee Louison though has now partnered with Goldline Curling, an apparel company, to take a small step to help change that feeling, a move that is part of the #UnitedWeCurl Initiative. Yee Louison and Black artists Andrew Paris and Deb Martin each created artwork for brooms that were features at the Pinty’s Grand Slam of Curling Humpty’s Champions Cup held last weekend.

The event took place in a pop-up curling bubble in Calgary’s WinSport Arena. A team led by Alberta’s Brendan Bottcher sported Yee Louison’s “Indigenous Culture” broom, which features sweetgrass, an eagle feather and a peace pipe in its design. The broom also shows a sun with a red hand print that represents missing and murdered Indigenous women and girls.

“The red hand represents a sad reality; that Indigenous women and young girls have no voice in society and we need to protect them because women in my culture are regarded as powerful and known as life-givers because they can give birth to our children,” reads Yee Louison’s description of the broom artwork.

“I thought it was a good opportunity to give a part of my culture, and tell a story of myself,” Yee Louison told Windspeaker.com about being invited to produce the broom art. “I’m really excited about how it turned out.”

Bottcher said he was proud of Goldline for taking on the initiative. #UnitedWeCurl is the company’s attempt to change the face of curling. In the summer of 2020, Goldline came out with a statement that said ‘we haven’t done enough to create openness in our sport’, said Erin Flowers, the director, public relations at Goldline Curling.

“We want to create a sport that is safer, more respectful and compassionate to anyone who wants to participate,” Flowers added.

“I think the designs are so creative and I hope that we can continue this conversation about diversity in curling,” said Bottcher.

His team was presented with the brooms just a few days before the event and were happy to use them. “It’s awesome for the sport. It just starts a conversation [about diversity in curling] which I think opens the door.”

Yee Louison grew up and went to school on reserve. He first got involved in curling at the age of eight. An individual in the area who had a team in Broadview told Yee Louison’s grandmother that her grandson should get into the sport.

“At first when I started playing, I had to use two hands to throw a rock and could barely get over the hog line,” said Yee Louison in a video on Goldline’s webpage. But it wasn’t long before the boy started to connect with the sport. He said he liked sliding on the ice. And as he grew up he also grew more competent, thriving on the pressure of competition and learning to make the big shots.

“When I walked into a curling club, at first people would think that I wouldn’t be as good because of the colour of my skin and because I was Indigenous… At the end of the game we would shock the team and the families in how well we played,” said Yee Louison. “I play to break down these stereotypes. But at my home rink, I’m treated just like anyone else.”

He said he decided to do the broom design to provide a visual and the stories that come with them. “This design represents my culture, which is a part of my life.”

Yee Louison is now a second-year Kinesiology student at the University of Regina, and hopes to make the university’s curling squad in the future, with a drive to move on to the larger professional circuits.

“That’s my goal at the moment,” Yee Louison said. “From then on, I hope to make the elite level after that.”