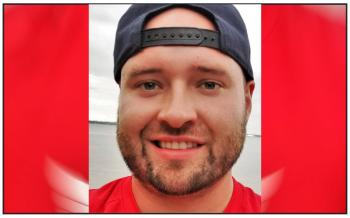 “One of the main reasons I continue to coach is to hopefully become a role model and mentor for struggling youth to help them decide the correct life in path, like my mentors did for me.” — Richard Pellissier-Lush
By Sam Laskaris
Local Journalism Initiative Reporter
Windspeaker.com

Richard Pellissier-Lush had an entirely appropriate reason for not being able to attend a ceremony to accept the most noteworthy award he has captured to date—the 2020 National Indigenous Coaching Award.

He was coaching a football game.

“I didn’t want to have to tell our kids I was missing the game because I was getting an award for coaching kids and then not be there for them,” said Pellissier-Lush, who lives in Springvale, a community about a dozen kilometres northwest of Charlottetown.

“Plus, it was our last regular season game of the year.”

Pellissier-Lush, a Mi’kmaq member of Lennox Island First Nation in Prince Edward Island, was selected as the male recipient of this year’s award, presented by the Aboriginal Sports Circle, the governing body for Indigenous sports in Canada.

The awards are presented to those who demonstrate outstanding contributions to Indigenous sport in Canada.

Veronica McDonald, a member of Chipewyan Prairie First Nation in Alberta, who currently lives in Yellowknife and coaches Arctic Sports, was chosen as the top female coach.

“I’ve won a lot of provincial awards and Atlantic (Canada) awards but I’ve never won anything for all of Canada,” Pellissier-Lush said. “It’s a huge honour.”

Both Pellissier-Lush and McDonald were recognized at last week’s Petro-Canada Sport Leadership Awards Gala, hosted by the Coaching Association of Canada.

Because of the pandemic, the awards ceremony was held online this year. Pellissier-Lush did pre-record an acceptance speech.

He is currently coach of the Cornwall Timberwolves’ Atom (under 12) squad, which includes his son Owen.

Pellissier-Lush had served as the head coach of the Timberwolves’ Varsity team for the previous four years but opted to join Cornwall’s Atom club this season as it is his son’s final year in this grouping.

Pellissier-Lush said he was surprised to be chosen as the top Indigenous male coach in Canada.

“I’m so proud and so thankful,” he said. “I’m very humbled but I feel that there are other coaches more deserving of this recognition.”

Pellissier-Lush, however, has done plenty in his home province to further the sport of football.

Besides coaching with the Timberwolves’ association, he also started a flag football program three years ago with children from the Scotchfort community, which is part of Abegweit First Nation.

Scotchfort’s team in the 12 to 14 age category captured the bronze medal at its provincial championship last year.

Pellissier-Lush, who is 27, played football himself while growing up and continues to do so.

He was a star high school player in Charlottetown and then took his talents to the University of Manitoba, where he was a member of a national championship team, winning the Vanier Cup in 2007.

After two years in Manitoba, he returned home and suited up for Charlottetown’s Holland College Hurricanes for four seasons, winning a pair of Atlantic Football League titles.

Pellissier-Lush then gave pro football a shot. Though he did not play a single game in the Canadian Football League (CFL), he did earn spots on the practice rosters of the Montreal Alouettes and Hamilton Tiger-Cats.

His pro career included playing a handful of games for an Atlanta-based squad in the Arena Football League.

Pellissier-Lush is now a player, general manager and owner of the Island Mariners, a senior men’s tackle football squad that participates in the Maritime Football League.

In his acceptance speech for his coaching award, Pellissier-Lush explained why he is giving back through football now.

“Sport helped me to stay on my right path as a young adult. It created opportunities that allowed me to travel across Canada to participate in sport, as well as create lifelong friendships that I am forever grateful for,” he said.

“One of the main reasons I continue to coach is to hopefully become a role model and mentor for struggling youth to help them decide the correct life in path, like my mentors did for me.”

Pellissier-Lush is also hoping his coaching skills will eventually land him a job in the CFL.

“I promised myself if I didn’t make it to the CFL as a player I would try to make it as a coach,” he said.

As part of their national awards, both Pellissier-Lush and McDonald will also receive a $1,500 bursary to support their coaching development.

Prior to the pandemic Pellissier-Lush spent four years working as a programmer for the PEI Aboriginal Sport Circle.

But now he’s working for L’nuey, an Aboriginal and Treaty rights organization that focuses on negotiations, consultations and governance development for the Mi’kmaq of PEI.

Pellissier-Lush is also an actor, musician and personal trainer.