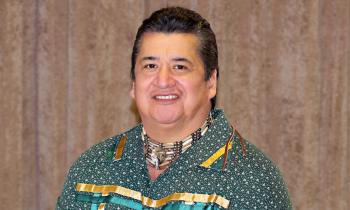 “I was very shocked and surprised to see that Canada Summer Games had signed a (memorandum of understanding) with one of their own board members to deliver the Indigenous programming in the games.” —Chief R. Stacey Laforme
By Shari Narine
Local Journalism Initiative Reporter
Windspeaker.com

The Mississaugas of the Credit First Nation has pulled its support from the Canada Summer Games only weeks before the national competition is set to get underway in Niagara.

In a damning letter sent July 11 to summer games board chair Doug Hamilton, Mississaugas Chief R. Stacey Laforme cited “disrespect, lateral violence and a strange pan Indigenous approach” for why the First Nation would no longer be involved.

“I think (the board) missed the boat big time when they had the opportunity to take reconciliation another step forward. Instead, they put it back,” Laforme told Windspeaker.com in a telephone interview July 13.

Laforme said he was “hopeful they’d take the right steps” in the beginning when conversations got underway between his First Nation and the board about a year ago.

Early in the planning stages, the board formed an Indigenous Partnership Council, which is no longer operational. The council, which comprised the Mississaugas of the Credit First Nation, Six Nations of the Grand River, Niagara Regional Native Friendship Centre, Fort Erie Friendship Centre, Métis Nation of Ontario, NPAAMB Indigenous Youth Employment and Training, Inuit, and Brock University, provided advice.

Laforme stepped back to allow the team that had been put in place for his Nation to take over discussions.

“When I got back involved, I was very shocked and surprised to see that Canada Summer Games had signed a (memorandum of understanding) with one of their own board members to deliver the Indigenous programming in the games. We’re all talking about reconciliation. Where’s the direct relationship with government-to-government? Where’s the respect to First Nations communities? And I include the Indigenous organizations in that too,” he said.

Laforme alleges the MOU was signed with board member Michele-Elise Burnett to act as a consultant.

According to the website for the 2022 Games, Burnett is “Metis with Algonquin roots.” She is president of Kakekalanicks, an Indigenous arts and consultancy company, and artistic director of Celebrations of Nations, an annual Indigenous gathering.

Not only do the “optics around that raise some concerns,” Laforme stated in his letter because it’s unclear if the board member financially gained, but it appears to be a short cut taken by the board instead of having “open dialogue with us to understand what we want to do.”

“I blame Canada Summer Games board for not knowing any better. They should know. We’re going through all this stuff. Residential schools. We talk about reconciliation for the last five years under the leadership of the Trudeau government and they’re still making beginning-step errors, in my mind.”

Laforme said his team told him the consultant wanted to have a “mish-mash of all the Creation stories at the opening. You don’t do stuff like that. There were other things in that line.”

But the pivotal point, says Laforme, is when he learned that his youth had been allegedly mistreated when they attended an opening, though the chief didn’t disclose details.

“I had got that confirmed by another organization, who said, ‘Oh yeah,’ they were also very upset. So I said, ‘Well disrespecting our youth in these times is almost reason enough itself to pull out’.”

After that, Laforme says, issues “escalated” and his team felt ignored during discussions with the board and couldn’t see how they could move forward. Laforme supported them in their decision.

He said he met with the summer games board, who were “very willing to sit down and have a discussion about what they could do to improve things with the Mississaugas, but at that point in time it was too late.”

He also noted that the board offered no specific actions to be taken.

The First Nation has directed the board to remove their name and logo from anything dealing with the games.

Laforme says other Indigenous organizations have raised concerns with him. He says none have committed to take similar action. However, he says, he supports whatever decision they make.

“One of the major things the Crown and Canada took away from our people was the right to choose: Choose our culture, choose our language, choose what we wear, even choose who our members are. I said I would never interfere with anybody’s right to choose. I said, ‘If you want to go ahead and participate in the games, I wish you the best of luck and I hope you’re treated well and for you, you feel the games are a success’, but for Mississaugas, we’ll always view the games as a failure.”

Although no one from the Niagara friendship centre was “actively involved” in what Laforme talked about or observed anything similar, Dockstader says he’s not going to dismiss the concerns voiced.

“We also think that it’s important to be respectful that an important partner has now withdrawn their support,” said Dockstader.

The Niagara friendship centre held its AGM on July 12. The letter was discussed by Dockstader and his board.

“We have started to have conversations about making sure we’re reflecting the will of the community in a good way,” he said.

When Windspeaker.com spoke to Dockstader early on July 13, he said they had not yet been contacted by the summer games board to discuss the concerns raised.

“We’re really in a wait-and-see mode. This is serious that the Mississaugas of the Credit have withdrawn and that they’re using the kind of language, talking about how the games are a failure and particularly that youth was let down. We take it seriously, but we also take our commitments and partnerships seriously,” said Dockstader.

He added that the Niagara friendship centre had not yet decided its course of action.

Canada Summer Games board did not respond to a request for an interview from Windspeaker.com.

The Canada Summer Games run from Aug. 6 to 21 in Niagara.