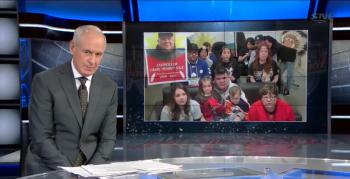 “…people were showing us love. I know we can’t reach everybody, but whatever way we can reach people to thank them, we tried.” — Ruth Levi

In the close-knit community of Elsipogtog First Nation, N.B., the last month has been a time of great celebration and tragic loss.

On April 10, Elsipogtog First Nation was named winner of the national annual Kraft Hockeyville contest, becoming the first Indigenous community in Canada to be bestowed with the honour. The move was announced live on Hockey Night in Canada. Bobcaygeon, Ont., Lumsden, Sask, and Saint Adolphe, Man. rounded out the other finalists in the running.

The annual contest has been held each year since 2006. The grand prize is $250,000 in renovations to Elsipogtog’s Chief Young Eagle Arena, and a visit to the local community by a pair of NHL teams in the future to play a pre-season game.

Chief Young Eagle Arena, which was named in honour of former Chief Albert Levi, was damaged by fire in September 2020. Levi was chief of Elsipogtog for 26 years and also enjoyed a storied wrestling career on various local and national circuits competing under the Chief Young Eagle moniker. He passed away at the age of 88 last October.

“It’s so unreal now to see the support. Once the ball got rolling, the support was really overwhelming,” Carpenter said. “I can’t believe basically all of Canada backed us up. We just kept looking at the videos and all the posts. It’s so unbelievable. It’s a big accomplishment and I’m really proud of it.”

But this uplifting news comes during a dark time for the Elsipogtog population, with the loss of band member Craig “Jumbo” Sock, a passionate hockey fan who has been missing since earlier this month in a fishing accident that resulted in the death of Seth Monahan, a deckhand on board of the FV Tyhawk off the coast of Cape Breton.

“Our whole community went into despair,” said Ruth Levi, an Elsipogtog band member. “We had nothing but a black cloud hovering over us.”

Levi, who is Carpenter’s aunt and daughter of Chief Young Eagle, said the community’s major responsibilities are twofold right now; manager the logistics of the Hockeyville win while launching a mission and fundraiser to locate Sock’s body.

“We’re shifting to search and recovery,” she said, but added that COVID-19 restrictions in New Brunswick have added an extra challenge to the lack of confidence in the search teams that have been deployed by various agencies to date.

“People here are willing to isolate and do our own search. We’re gonna go find him and bring him home.”

In the short-term, however, small parade is set for April 24 to celebrate the community’s Hockeyville win.

“You can still see the joy and the proudness in the community members,” Levi said, adding that messages were pouring in on the various Facebook pages set up for the arena bid and organizing efforts. Across Canada “people were showing us love. I know we can’t reach everybody, but whatever way we can reach people to thank them, we tried.”

Levi is excited for the potential of visitors to the arena once the revitalization work is complete.

“When COVID goes away, please do drop in and see the new arena,” she said. “Have a cup of tea with us. If it’s in the summer months, let’s have a lobster boil.”

After they qualified as a top four finalist, Levi’s instincts kicked in and she decided to take a leave from work in order to give a full effort to the contest.

“I just helped promote. We called it an ‘auntie tour’ as a joke,” Levi said. “I just said ‘give me banners, give me posters, I’m going and I’m touring New Brunswick’.”

The organizing committee and Kraft Hockeyville was set to undergo a meeting Monday to establish more concrete plans for the use of the funds. Smoke damage from the fire and roof replacement were set as two priorities, Carpenter said.

Carpenter, who had returned to New Brunswick from the University of Ottawa during the COVID-19 pandemic in order to complete her Master’s studies in Communications online, is currently looking to launch a local women’s hockey team.

“I started playing before I could walk,” Carpenter said. “I’ve been skating since I was two or three years...We’d rent the ice at least once or twice a week [at Young Eagle Arena] on top of my hockey schedule just so I could practice and do whatever I could to get me to my goal.”

Carpenter completed a Bachelor’s degree at Plymouth State University in 2018, where she played Division III hockey while studying Health Promotion.

Though admittedly overwhelmed by it all, Carpenter said she’s been reflecting on what has been a whirlwind journey.

“We’ve been rallying everyone to get out and vote,” Carpenter said. “And here we are as the champions.”