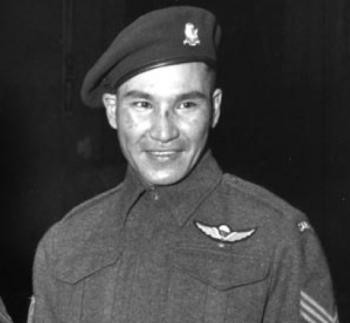 Tommy Prince, the most decorated Aboriginal soldier in Canadian history.

The Devil's Brigade was originally formed as a parachute unit that would drop behind enemy lines and sabotage their installations, but what it became was an assault group, expert in specialized reconnaissance and raiding.

From the War of 1812 to today's peacekeeping duties around the world, thousands of Indigenous people have dedicated themselves to serving in the Canadian military. One estimate puts the number of Aboriginal people who served in the First and Second World Wars and the Korean War at more than 12,000. The most well-known and remembered among them was Sergeant Thomas George Prince.

Tommy Prince was born in Petersfield, Man. on Oct. 25, 1915 to Henry and Arabella Prince. A member of the Brokenhead Ojibway Nation, Prince was a descendant of Chief Peguis, who in the 1790s led his people from Ontario to a new home in Manitoba. When Peguis converted to the Anglican religion in his sixties, he was given the name William King and declared that his sons were now all princes and would be known by that name.

As a child, Tommy Prince learned to hunt and trap from his father. At age five, he began attending Elkhorn residential school, where he stayed until he was 16. There he joined the army cadets and had the opportunity to demonstrate his skills as a marksman. Those skills served him well during the depression. When money grew short and no odd jobs were to be had, he could go out and hunt to feed his family. He hunted, cut wood and worked on and off as a farmhand. Then, in June 1940, at the age of 24 he enlisted with the Royal Canadian Engineers. Within a year he was a lance corporal.

In September 1942, he answered a call for paratrooper volunteers and was promoted to sergeant and transferred to the 1st Canadian Parachute Battalion. In October of that year he was assigned to the Canadian-American First Special Service Force, the Devil's Brigade.

The Devil's Brigade was a force of elite Canadian and American soldiers trained to handle anything that was thrown at them. That training included parachuting, skiing, mountain climbing, hand-to-hand combat and night fighting. Each member also learned how to handle explosives, how to use every weapon available to the Allied Forces, and how to use weapons captured from the enemy.

The Devil's Brigade was originally formed as a parachute unit that would drop behind enemy lines and sabotage their installations, but what it became was an assault group, expert in specialized reconnaissance and raiding.

It was on the beachhead at Anzio on the West Coast of Italy that Prince earned his first honor, the Military Medal. The Devil's Brigade had landed on the beach on Feb. 1, 1944 and quickly took more than a quarter of the 30-mile-long front.

Prince earned his medal on Feb. 8 of that year when he ran a telephone wire from allied lines more than 1,500 yards into enemy territory to a deserted house where he established an observation post. He manned the post for 24 hours, during which time he could see the placement of enemy artillery that couldn't be seen from the allied lines. He reported the co-ordinates back to his regiment.

At one point the telephone lines between his observation post and the allied troops were cut by shells, so Prince put on clothing he found in the house, grabbed a hoe and went out to the site of the damage. While pretending to be a farmer weeding his crops, Prince worked his way along the line until he found the place where it had been severed. He bent down, pretending to tie his shoe, and rejoined the lines, repairing the damage in full view of the German troops, then returned to his post. Thanks to the information Prince provided, four German positions were destroyed.

In early September 1944, he earned the U.S. Silver Star with ribbon when he led a two-man reconnaissance patrol deep into enemy territory near L' Escarene, France, traversing more than 40 miles of rocky terrain.

The information about the enemy's position and armaments that the patrol brought back was so accurate that Prince's regiment was able to move on the area and completely wipe out the enemy encampment.

Other medals and decorations Prince received for his service in the Second World War were the 1939-1945 Star, the Italy Star, the France and Germany Star, the Defence Medal and the Canadian Volunteer Service Medal with clasp.

When the war came to an end, Prince returned to civilian life, starting up his own cleaning business. In December 1946, he was elected as chair of the Manitoba Indian Association, and consulted with Aboriginal communities across the province regarding the federal government's plans to revise the Indian Act. He came up with a number of sound, well-researched suggestions for change, but was frustrated by the government's refusal to listen to what he had to say.

In August 1950, at the age of 34, he renewed his military career, joining the Canadian Army Special Force for service with the United Nations in Korea. He enlisted with the 2nd Battalion, Princess Patricia's Canadian Light Infantry, and by the end of the Korean conflict he'd earned the Korean, Canadian Volunteer Service and United Nations Service medals to add to his already impressive list of honors.

Soon, however, climbing over the steep countryside in Korea began to play havoc with Prince's knees and a check-up found he had arthritis. He returned to Canada and took up a job as an administrative sergeant at Camp Borden. When the break from active duty eased the pain in his joints, he requested a second tour of duty and in October 1952 returned to Korea.

On Nov. 17 he was leading a group of 14 men to find an enemy work party when he was wounded. After the Korean Armistice was signed in July 1953, Prince returned to Canada where he instructed new recruits in Winnipeg. The following October he was honorably discharged.

His life as a civilian began again. Prince met Verna Sinclair and started a family of five children. But things went steadily downhill for Prince. Between problems with his knees and discrimination because he was an Indian, it was difficult to find a job and he developed a drinking problem. In 1964, he and Verna separated, and their children were placed with Child and Family Services. By the end of his life Prince had overcome his problems with alcohol. On Nov. 25, 1977, he died at the age of 62.

More than 500 people attended his funeral, including friends and family, the lieutenant governor of Manitoba and consuls representing France, Italy and the United States. He was given a service with full military honors. A delegation of Princess Patricias served as pallbearers, draping a Canadian flag over Prince's coffin. The service ended with members of his home reserve chanting a warrior song.

While 40 years have passed since Prince's death, his name lives on. On Brokenhead Ojibway Nation, you will find Sergeant Tommy Prince school, as well as a commemorative statue of Prince. The Department of National Defence has given his name to a program, The Sgt. Tommy Prince Army Training Initiative, designed to make the transition into the Canadian Forces easier for Aboriginal recruits.

The Assembly of First Nations has created an annual scholarship in Prince's name. And 10 of the 11 medals Prince earned during his military career, once lost, have been recovered and returned to the family, held in trust for them by the Manitoba Museum. It's all part of the lasting legacy of Thomas George Prince, the most decorated Aboriginal soldier in Canadian history.