Norma “Rose” Point: Keep a positive attitude about everything 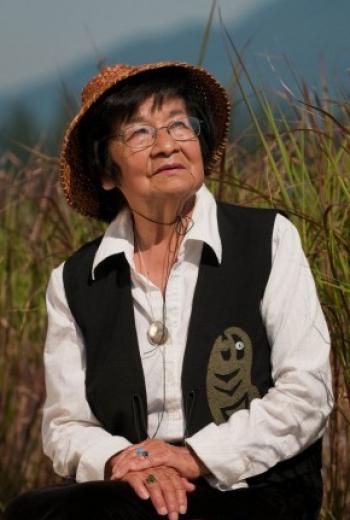 Musqueam Elder Norma “Rose” Point, who passed away unexpectedly on July 2, 2012 recalled walking miles as a child over crusty snow to bring fruit and fresh-baked bread to a sick man confined to his bed.

“I didn’t think of the distance because I saw the sparkle of the moon on the snow and (heard) the crunch of it under my feet,” Rose told Alannah Young-Leon, who recorded the Elder’s memories for a 2011 Simon Fraser University article called “Reanimating Storywork: Indigenous Reflections on Leadership.

Though she was only eight years old at the time, Rose remembers being happy about visiting the man, rather than begrudging the three-mile journey she had to make with her aunt to reach his house.

“Helping the old and suffering … and helping the ones that are left after they go, saying goodbye and being with the family–I think the joy in your heart in helping others continues,” Young-Leon quotes Rose in the paper.

Throughout her many years of supporting students and her involvement on numerous health and education-related boards and committees, Rose never held back giving her all when it came to offering kindness, inspiration and wise counsel.

Though she was 78 years old, she only retired from her position as an Aboriginal services advisor at the British Columbia Institute of Technology in March 2012. She travelled to work at the Burnaby campus by bus every day from her Musqueam First Nation community.

“I had the opportunity to attend Elder Rose’s retirement ceremony,” said BCIT President Don Wright. “It was gratifying to see how much she was respected both on and off campus for the work she did and the wonderful example she set.”

On a BCIT Web site announcing her passing, Domani Barrow wrote: “When I met Rose, she reminded me so much of my own mother – I was in complete awe of her hectic schedule. The world surely needs more people like Elder Rose. She will be missed.”

Rose’s influence will live on in a scholarship created in her name, reminding future students of this woman who never missed an opportunity to speak of the importance of education and who inspired countless young people to reach their goals.

“She shared her teachings with children and youth at UBC summer camps. She taught us all to be proud of who we are and to support each other,” UBC’s communications officer Thane Bonar said.

Point was originally from the Seabird Island Band, part of the Sto-lo Tribal Council. She married Cagney Point from the Musqueam Indian Band in the 1950s, was welcomed by the community, and lived on the reserve from then on.

She was also linked to the Nlaka’pamux in the Thompson region where her mother Theresa was from.

Fresh out of residential school, Rose waitressed for a year in what she considered to be a reasonable profession until the local priest took her aside and told her she couldn’t do that for the rest of her life.

Since she’d worked in the infirmary at school, she took him up on his suggestion that she become a nurse, but failed the exam and thought she’d have to do something else.

As did so many other young women her age, she managed to get a job in the hospital as a kitchen maid and, six month’s later, became a nurses’ aid.

She married and had two children, but found herself bogged down with domestic chores like wringer-washing countless cloth diapers. Deciding she could do much better with an automatic machine, she substituted at Vancouver General hospital as a nurses’ aid for two months, and then bought one.

She started the Musqueam reserve’s pre-school – the first ever opened on a Native reserve in Canada – and she was involved in a live theatre group called Spirit Song, which trained aspiring actors.

Rose’s drive and capability helped win her an invitation to sit on an Aboriginal advisory committee for the school of social work at UBC, and in 1990 she started working with the House of Learning at the university. Later, she was asked to sit on the First Nations Health Careers and Native Indian Teacher Education Program Committees, and either originated, or was involved with, numerous other initiatives and organizations.

Rose touted her aunt as being a huge influence in her life.

“I think the racism at that time was so great and yet I never let it take me down,” she is quoted as saying in Reanimating Storywork. “It was there, it was a fact, and I would never lose sleep over it. Plus, my aunt said … if they are going to treat us like that it is their problem, not ours. Don’t take it on as your own problem. She says ‘chin up, chin up.’ No matter what anybody says we don’t hang our head or cry over something that is not our problem.”

As was her people’s tradition, her aunt took her to witness births early on so she would think twice before having sex. It was part of a young girl’s training that “you don’t just sleep around to have babies. Babies are supposed to be brought up with a purpose.”

Rose was taught to believe in herself and carry herself as a leader. Slouching was out of the question. In fact, she remembered being made to walk around the house balancing a book on her head to develop a straight spine.

In turn, the long-time foster parent who also had four birth sons, said her leadership priority was with children and she followed a doctrine of non-punishment, preferring to reward positive behaviour.

“I never remember getting spanked, sworn at, or getting punished for anything that I did wrong. We were talked to and explained why we shouldn’t do those things,” Rose said. She observed many parents made their children do chores, go to bed, do homework, or finish everything on their plate as punishment, and from then on they equated these activities as something bad rather than as “something that has to be done.”

Keep a positive attitude about everything, she maintained, going so far as to blame her car problems on her own “mean thoughts.”

After the transmission in her vehicle went, she admitted she’d been getting mad at people who asked her for free rides even as she went into debt paying $60 s a week to keep the car on the road. After it blew up, she never replaced it, opting to take the bus to work every day thereafter.

On July 6, 2012 BCIT lowered flags to half-mast in honor of Rose. UBC also lowered its B.C. flag in her memory.