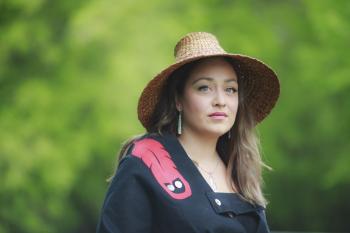 “I hope it can create change and empathy for the reality of trying to protect our land.” —Heather Hatch about her film Wochiigii lo: End of the Peace
By Sam Laskaris
Local Journalism Initiative Reporter
Windspeaker.com

Heather Hatch just wants to get a message out.

Hatch, a Haida Nation filmmaker, will get an opportunity to do just that tonight, Thursday Oct. 14, as her documentary Wochiigii lo: End of the Peace has been selected as the opening night film for the Planet in Focus (PIF) International Environmental Film Festival.

An in-person screening of the film will be held at stackt market in Toronto, a venue which was established in 2019 and is designed entirely out of shipping containers.

Currently under construction, the dam is on the Peace River in northeastern BC. It is located 14 kilometres southwest of the city of Fort St. John.

A number of First Nations believe dam construction has violated Treaty 8, which when signed in 1899 was expected to remain binding on the parties for “as long as the sun shines, the grass grows and the rivers flow.”

Though some legal challenges have been presented and dismissed, court battles continue over this hydro dam.

“I hope it can create change and empathy for the reality of trying to protect our land,” Hatch said of her 90-minute film.

The screening at the PIF International Environmental Film Festival will mark the second time in as many months that Hatch’s film has been shown in the country’s most populous city.

Wochiigii lo: End of the Peace had its world premiere at the Toronto International Film Festival held in September.

The documentary was also picked up by film festivals in Sudbury, Edmonton, Halifax and St. John’s, Nfld.

“I think it’s strange nobody in BC wanted to play it,” Hatch said. “That might be because they already know about it though.”

Hatch is hoping the film, however, will have a theatrical run throughout the province. And she is hoping to have a screening of her film in West Moberly First Nations, one of the Treaty 8 Nations opposing the dam.

“If completed, the project will flood thousands of acres of agricultural land, threaten critical habitat, and endanger a way of life that has been sustainably practiced for millennia—even as official assessments suggest the dam’s potential benefits are difficult to discern,” reads part of the film synopsis.

Hatch, who was born in Vancouver but who now lives in Edmonton, heard about the Site C dam controversy after she worked on videos with a poet from Prophet River First Nation, another Treaty 8 Nation opposed to the hydro project.

“It was her social media that brought attention to this story,” Hatch said, adding she began working on her film in 2016.

The documentary features various Indigenous people offering their thoughts on how dam construction will destroy their communities.

BC Premier John Horgan is among those whose comments are presented in the documentary. When Horgan was leader of the opposition NDP Party, he was a vocal critic of Christy Clark, the then Liberal Premier, who supported the dam’s construction.

Once his party came to power, however, Horgan is seen flip-flopping on the issue in the film, claiming the project needed to continue since its construction was beyond the point of no return.

“It’s very blatant what they’re doing,” Hatch said of not only politicians but all those, including hydro representatives, who are keen to see the project through to completion regardless of treaty violations, opposition from Indigenous nations and many others.

“It shows where we are in terms of reconciliation.”

“Overall, PIF’s 2021 festival program represents intersectional stories about climate, nature, ecology, activism, environmental racism, and allyship,” she said. “Given the particular trauma that Canada’s Indigenous people have experienced during these unprecedented times, our opening night selection, Wochiigii lo: End of the Peace, by Heather Hatch, is a timely, multilevel story, expressed in a single, equity inspired narrative. We look forward to sharing this dynamic film with our PIF audiences this year.”

The PIF festival continues until Oct. 24. Planet in Focus is a charitable organization devoted to raising awareness about social and environmental issues through film.

Both Canadian and international films will be shown at this year’s festival, which will primarily be held online.

Ticket information on individual screenings and festival passes, as well as more details on all film is available at www.planetinfocus.org