Better UNDRIP legislation could be a silver lining in the storm clouds of COVID, systemic racism 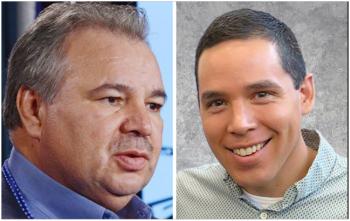 David Chartrand of the Métis National Council and Natan Obed of the Inuit Tapiriit Kanatami.

“Just saying you believe in something, you believe in the principles of [UNDRIP], doesn’t really give Indigenous peoples in Canada much more than we already have.” — Natan Obed, president of Inuit Tapiriit Kanatami
By Shari Narine
Local Journalism Initiative Reporter
Windspeaker.com

COVID-19 and a sudden awakening to systemic racism in Canada could result in stronger proposed federal legislation to implement the United Nations Declaration on the Rights of Indigenous Peoples (UNDRIP).

“I think that we are in a better place to have meaningful conversations about real change,” said Natan Obed, president of Inuit Tapiriit Kanatami (ITK).

“It’s not that the country hadn’t been made aware of these issues, but somehow these are all galvanizing in a way I do believe will bring widespread changes and I do feel that in my relationship with federal ministers there is an understanding of this and an urgency now that perhaps didn’t exist before.”

Talks are ongoing between the Liberal government, led by the Minister of Justice and Attorney General of Canada David Lametti, and representatives from ITK, Métis National Council and the Assembly of First Nations.

In an email to Windspeaker.com, Rachel Rappaport, spokesperson for the Justice Minister, said the government was still committed to introducing co-developed legislation to implement UNDRIP by the end of 2020.

The original plan had been to give first reading to the legislation in the spring session. However, the coronavirus pandemic took over federal priorities in March and resulted in the cancellation of regular House of Commons sittings.

“We did not want to delay UNDRIP, but given the fact it’s forced to delay based on … COVID, we … now have an extension on consultation which now gives us maybe a better opportunity to have a more robust dialogue,” said MNC vice president David Chartrand.

Obed agrees. He says the government had indicated its intention to introduce the text from Bill C262 for UNDRIP legislation. That bill, proposed by NDP member Romeo Saganash, was killed by the Conservatives in the Senate in 2019.

ITK is pushing for the new legislation to “draw very clear lines” between work outlined in the National Inquiry into Murdered and Missing Indigenous Women and Girls final report and the Truth and Reconciliation Commission’s Calls to Action.

ITK also wants the legislation to include a provision that sets a timeframe and process for creating an Indigenous human rights mechanism.

Obed says it’s not acceptable that every challenge to Indigenous human rights must go to the Supreme Court of Canada as “systemic racism … colours the relationship (Indigenous peoples) have with the existing human rights commission in this country.”

Obed believes that the public conversations that are happening now have an “urgency and new understanding” that he expects to be reflected in new UNDRIP legislation.

“I think it will change the debate. In the past the debate has centred around the red herring of Indigenous veto rights to resource development,” said Obed, adding that “veto” is not a word included in UNDRIP.

“What I hope now the conversation will be is about how to use the declaration to best empower Indigenous peoples in this country and to end systemic racism, and UNDRIP is a perfect vehicle when taken in totality to work on that.”

Chartrand believes the new conversation can happen with the different levels of government as well as the private sector.

“So UNDRIP will now be the blueprint to really set the stage when investors are looking at an opportunity to develop natural resources in Canada. It’ll now say to them, ‘We have to include Indigenous people as our partner in discussion and dialogue.’ So that is what I think is so strong,” said Chartrand, who adds this additional time is allowing him to have those conversations with the private sector.

Obed says it is important for Indigenous peoples to be involved now. Once the legislation is tabled and receives first reading, it is harder to change.

Both Obed and Chartrand say their respective organizations have had bilateral meetings with Lametti as a means to focus on distinctions-based issues.

“We have tried to not only work collaboratively with our partners, but we also have been very clear with the federal government about the Inuit-specific considerations within this legislation because in Canada there is such a huge difference between the legislated and policy base for First Nations, Inuit and Métis. It is incumbent upon the federal government to consider those differences in the way that it develops legislation,” said Obed.

Despite the conversations that surround the need for changes to address systemic racism, both Chartrand and Obed are concerned that UNDRIP legislation may not get support from all political parties.

“I am concerned that other political parties might continue to oppose the legislation and might gain in popularity because of it. I don’t believe this awakening in this country includes all Canadians. If you look at social media, if you see the debate there’s still a lot of people who do not believe that the gains that Indigenous peoples have made in the last five years with this government should be a priority of this federal government. I am worried that the same arguments will continue to be made,” said Obed.

Chartrand singles out the Conservatives and the “fearmongering they use for political votes.” He’s confident the Bloc Québécois will give their support.

“The Bloc Québécois has a strong relationship for the Métis and, of course, with Quebec. It goes a long ways to the days of Riel. I think there’s a clear indication of that strength in the relationship still 150 years later and now for the Bloc to speak against the Métis, to not respect them, I think would not sit well with many Quebecers,” said Chartrand.

Chartrand and Obed are hopeful the new UNDRIP legislation will receive first reading this fall.

AFN National Chief Perry Bellegarde did not respond to a request from Windspeaker.com for an interview.