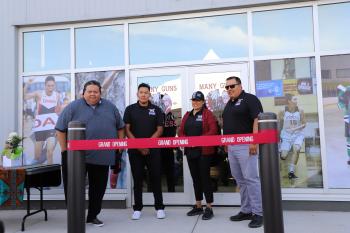 “We want to promote the sport. Who knows, we might have some people that take boxing to the next level.” —Manny Yellowfly
By Sam Laskaris
Local Journalism Initiative Reporter
Windspeaker.com

The price is certainly right for Siksika Nation members looking to join a new local gym.

The Many Guns Boxing and Fitness Centre had its grand opening this month at the First Nation located in southern Alberta.

“Siksika Health Services paid for the works, for the operation of the gym and the setup,” said Manny Yellowfly, a therapeutic physical trainer. “It was a lot of money. I’d prefer not to put a price on it.”

Siksika Nation currently has about 15,000 members who live either on the First Nation or off reserve.

A goal is to have as many Siksika members as possible visiting the gym and working out in order to improve not only their physical fitness but their mental well-being as well.

All members of the Nation will be able to utilize the facility for free for a bit.

“Initially it will be free for everybody,” Yellowfly said. “There will be a fee incorporated down the line. But we want people to use it as much as possible.”

Yellowfly added running a lucrative operation is not the motivation of this business.

“We’re not looking at the money,” he said. “We’re looking at getting our people in there.”

Yellowfly graduated from Calgary’s Mount Royal University in June. He earned a Bachelor of Health and Physical Education degree, with a major in sport and recreation management.

Yellowfly said he is thrilled he landed a job with Siksika Health Services, where he can immediately start applying his degree.

“I’m really excited to put that to use,” he said. ‘I’m hoping I can be that person to take physical aspects and help them with their mental health as well.”

Yellowfly said the new facility is big news in his community.

“We haven’t had anything this big on our First Nation,” he said.

The facility is located at the Siksika Business Plaza, which also includes a grocery store and a gas station. The plaza is a place that many Siksika members already frequently visit for various other needs.

“They know how easy it is to get to the gym,” Yellowfly said. “It’s right there in the open.”

The gym is also easily recognizable because its windows are covered with images of young Siksika Nation athletes.

The new centre will have activities for all ages. Besides fitness classes, the gym will offer yoga sessions, circuit training, the martial art of Muay Thai, and as its moniker suggests, boxing classes.

The facility name honours the late Clifford Many Guns, who was a huge sports advocate in Siksika Nation.

Yellowfly believes that those that will take advantage of working out at the gym will start to feel better.

“Physical fitness is a big help in enhancing your daily mood,” he said.

And yes, all members of the Nation will have the opportunity to give boxing a shot.

“We want to promote the sport,” he said, adding some boxing workouts have proven that they can be beneficial to one’s mental health. “Who knows, we might have some people that take boxing to the next level.”

Some programs that will be offered at the gym will include just sparring sessions.

Though the centre had a soft opening earlier this month, Yellowfly anticipates the number of programs being offered to ramp up soon.

“I’m hoping in the coming weeks we should be up and going,” he said.