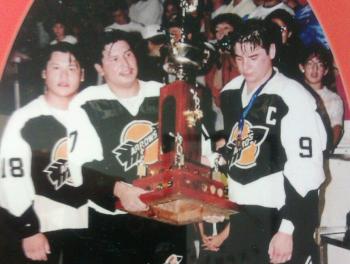 Cam Bomberry (right) was captain of the Six Nations Arrows when the team won the Minto Cup, the national Junior A title, in 1992.

“It came as quite a surprise. I didn’t know anything was in the works for it.” —Cam Bomberry
By Sam Laskaris
Local Journalism Initiative Reporter
Windspeaker.com
OHSWEKEN, Ont.

Almost two decades after his father Cap was inducted, Cam Bomberry will also be entering the Canadian Lacrosse Hall of Fame.

The elder Bomberry was one of the 2001 inductees via the Builders category, even though he was also an elite player.

And this past week his son, a Mohawk who lives in the Six Nations community of Ohsweken, was notified that he will be one of the 2020 inductees into the hall, located in New Westminster, B.C.

Cam Bomberry, who will be inducted via the Players category, received a phone call last Wednesday that he was one of the eight hall of fame inductees for this year.

“I was at my nephew’s having a swim and that’s when I was contacted,” he said.

Bomberry, however, wasn’t able to go out and celebrate with family and friends upon receiving the news.

“In this time, you’re mostly hunkering around home,” he said. “But I did have a lot of congratulatory messages.”

Immediately upon receiving the news last week, Bomberry said he called his father, who is now 80. “He was the first one I called.”

“It came as quite a surprise," Bomberry said about being chosen. “I didn’t know anything was in the works for it.”

“Your name kind of goes into that process and I guess it just gets discussed,” he said.

Bomberry is certainly a worthy inductee as he won numerous prestigious championships during his playing days.

Since Six Nations did not have a Junior A club at the time, Bomberry played his first three years of junior with the St. Catharines Athletics.

He returned home to suit up for the Six Nations Arrows when they were granted a Junior A franchise in 1991. The following year, his last season of junior eligibility, Bomberry was the captain of the Arrows as they captured the Minto Cup, the national Junior A title.

Bomberry considers that championship the most memorable one of his career.

“You only get a certain amount of time to win that,” he said, adding he was thrilled to win a national crown with a team from his home community, primarily with players he had grown up with.

Bomberry went on to play for his hometown Six Nations Chiefs, the Senior men’s team, winning a pair of national Mann Cup championships in 1994 and ’96.

He also played eight seasons of pro in the National Lacrosse League, splitting his time between the Buffalo Bandits, New Jersey Storm and Rochester Knighthawks. A highlight was being part of the league champion Knighthawks in 1997.

Though he is 49 now, Bomberry continues to play. He was a member of the Six Nations squad that captured the Ontario masters (40 and over) box lacrosse title last August.

“It was my first full season with them,” Bomberry said. “It was a lot of fun. Before I had played in a few tournaments with them but never a full season.”

How long does Bomberry himself plan to keep playing in Masters tournaments?

“Til the wheels fall off,” he said.

Bomberry has also remained involved with the sport by coaching various Six Nations teams over the years.

And since 2009 he has been the Director of Lacrosse for the Iroquois Lacrosse Program, a venture which has operated camps and clinics across the country.

Including this year’s inductees, the Canadian Lacrosse Hall of Fame now has 543 individuals who have been honoured: 328 through the Players category, 160 Builders and 55 Veterans. Also 23 squads have been inducted via the Team category.

An induction ceremony is typically held each November. A date has yet to be announced for the 2020 event.

Bomberry is hoping pandemic restrictions that have been put in place will be lifted by November and that a ceremony he can travel to in B.C. will be held.

“Hopefully everything will be cool by then,” he said.