Footprints: A person of the street, Charlie was kind and generous to the end 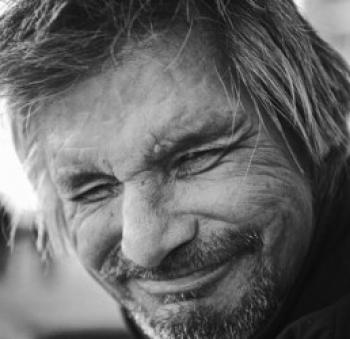 “No one was really there for Charlie. He pretty well learned everything he knew from off the streets. He grew up with nothing.”

Former street person Charles “Charlie” Delorme, a Tsastonotine Dene from near Fort Resolution, N.W.T., was giving away huge chunks of his $100,000 residential school settlement to charity.

The windfall afforded him the chance to reside in luxury after years of hard-scrabbling without comforts, but he used portions of the money to “do something good” for others.

Pictures of Delorme presenting a $10,000 cheque to the Stanton Territorial Hospital Foundation, $5,000 to Yellowknife’s Salvation Army, and $2,000 to the Sidedoor Youth Centre hit the media.

And he made it clear he wasn’t finished yet.

But then he passed away on Nov. 29, 2013 propelling another wave of stories to impact an even wider audience.

Touted as the “kindest and most giving person” by one Yellowknife mourner on a CBC Web site, similar adjectives were used to describe him as testimonies of his selfless generosity were shared on a Facebook memorial page.

For decades, childhood friend Roy Erasmus saw Delorme walking downtown almost every day and was hurt to see him getting increasingly frail over the last five years.

“He drank. We all drank when we were younger, except Charlie didn’t stop. When you drink steady, there’s no time to let your body recuperate. You don’t eat right and you don’t sleep properly. He was suffering but he never complained. He was always smiling and making jokes.”

Even as a kid in elementary school, Delorme was funny and loved making people laugh, Erasmus recalled.

“And he was good at math. I don’t know what kind of marks he got but in class, when the teacher asked a math question, Charlie always knew the answer.”

Erasmus described Delorme as a happy-go-lucky kid, even though his upbringing was harsh. After his parents Archie and Helen separated, his mother moved him and his siblings to Yellowknife and Delorme had to grow up quickly.

“No one was really there for Charlie,” said Matthew King in a CBC video. He has known Delorme for 55 years. “He pretty well learned everything he knew from off the streets. He grew up with nothing.”

The thing was, Delorme was altruistic, instead of bitter.

“He shared everything he had – even wrapping up leftovers from his meals to give to hungry friends on the street,” recalled King.

“He was a shy boy. When he was younger, he loved to play sports. When he played hockey, he kind of reminded me of Guy Lafleur. He was quick … you couldn’t touch him.”

Delorme had a soft spot for children, and he once spoke out at a meeting held to protect the family violence act about how children had to be protected from being hurt.

When he attended church each Sunday, he brought candies for the children, and a little girl named Hope, who was particularly close to his heart, would run up to him, give him a hug, and sit with him, said Salvation Army Manager of Operations Craig Thomas.

Delorme dispensed with alcohol on Sundays, Thomas said, and sat in the front row at church beside the projector used when hymns were sung, taking it upon himself to change the overheads on the songs.

Erasmus has an image in his head of Delorme that will never go away.

“We are a small Aboriginal community in Yellowknife, so when someone passes away we all go to the funeral. Charlie would come into the church and always put some roses in the open coffin. He’d do that, very quietly, and then he’d go sit by himself at the back of the church.

“Charlie couldn’t afford to buy flowers, but that was his way of honouring the person. There was something about him … dignity. He always found work, whether it was collecting cans or shovelling snow. He didn’t like to panhandle. He always looked for odd jobs.”

Close friend Maurice Gaudet said he was proud to have known Delorme. “He was kind, and a jolly old guy. When it would snow he used to say ‘money’s coming down, money’s coming down’ because he knew he’d get work shovelling sidewalks.”

Close to 200 people attended Delorme’s funeral in Yellowknife. Charlie Beaulieu told the audience Delorme descended from proud people and that his great great grandfather had fought alongside Louis Riel in the 1885 resistance.

Father Ben, presiding over the ceremony, asked the mourners, “Why would he give so much money to other people? Because he never stopped wanting others, especially children, to have better opportunities than he had in his young day.”

“Charlie really started a ball rolling,” said Ruth Mercredi, who attended his funeral. “He reminds us to be kinder to each other and especially to the people on the streets because they really need us.”

Delorme had one last surprise for his Yellowknife friends. When he donated $5,000 to the Salvation Army his only request was that staff prepare a first rate supper –“steak with all the fixings”—for residents. And that is exactly what those who attended his funeral enjoyed in his memory after formal proceedings were over.