Dr. Stan Louttit: Grand Chief saw his commitments through, even in difficult times 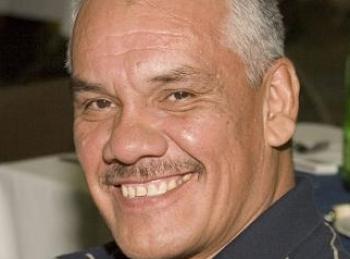 "He spoke for hours and hours as we waited for some geese or ducks. I absorbed all I could so I could carry the same values and extraordinary work ethic my grandpa had.” —Warren Hardisty
By Dianne Meili
Originally published in 2014

“It wasn’t really hunting. It was education,” recalled Hardisty. “He shared his vision and dreams for our people. He spoke for hours and hours as we waited for some geese or ducks. I absorbed all I could so I could carry the same values and extraordinary work ethic my grandpa had.”

The take-away for Hardisty was: No matter what you were doing, make sure you saw it through to the end to the best of your abilities.

Louttit lived these teachings, continuing his third consecutive term as Mushkegowuk grand chief even as he received chemotherapy treatment after his cancer diagnosis in the fall of 2012. After his family had been told he had weeks to live, Louttit’s time came a few hours later and he lost his fight on June 10. He was 64.

Devoting his life to politics, he held numerous leadership positions over 30 years and received awards for his work in effecting change. He transformed the lives of James Bay coastal people, said Timmins-James Bay MP Charlie Angus in his House of Commons tribute to the respected leader, and fought for education, health and housing. Above all, though, he wanted Canada held accountable for commitments made when treaties were signed.

“He loved music and storytelling, and even the Montreal Canadiens,” Angus joked, emphasizing Louttit’s sense of humour and ability to make people around him feel comfortable.

Louttit regularly educated First Nations and non-First Nations people about Treaty relationships, according to a Wawatay News article, in a presentation he called “The Real Agreement as Orally Agreed to,” which chronicled the history and nature of the document his grandfather signed in 1905. Based on oral history, consultations, and extensive research, he developed it with Nipissing University professor John Long, author of the book, Treaty No. 9.

Last summer (2013), the Mushkegowuk Council launched a lawsuit against the Ontario and Canadian governments, citing oral promises made in the diaries of treaty commissioners of the day which were not written in the agreement, the Wawatay News article continued. In the fall of 2013, Louttit also announced his council was launching a ‘Peoples Inquiry’ into the suicide crisis assaulting Mushkegowuk communities in the face of government inaction.

Championing a better life for his own and all Aboriginal people, Louttit endeared himself to midwife Christine Roy, demonstrating his devotion to those just being born. One of his many achievements included “powering through road blocks that kept women in remote northern communities from having their babies at home” she wrote in her Facebook tribute.

For decades. the women of Attiwapiskat were flown out to have their babies in southern hospitals until Roy, backed by Louttit and others, advocated for a midwifery program there.

“Stan held this ‘file’ very much at heart and he made sure it moved forward. He saw the return of birth on Cree territory as an essential ingredient in the healing path and taking back what was wrongly taken away,” Roy said. “He spoke eloquently and with great emotions about life and birth on the land, and the work of the midwives in the past. His dedication to see this return was essential.”

He, himself, was born on his family’s traditional homelands at Lake River, about 160 km north of Attawapiskat, as a Fort Albany First Nation member, before moving to Moose Factory as a teen. Louttit lived there for the past 50 years and was made an honourary member in acknowledgement of his contributions to the community.

In 1988, he received the Ministerial Award and the Governor General’s Medal of Bravery in recognition of his efforts during the Winisk flood. Luke Gall, in a Facebook post on Louttit’s memorial page, recalled how Louttit risked his life in 1986 to save others, especially Gall’s handicapped mother.

“She had lost her legs due to diabetes … Stan was there to help and put her on the helicopter,” he wrote.

Louttit worked at the Moose Factory General Hospital and was chairperson of Mushkegowuk Council from 1992 to 1993. He was twice elected as Nishnawbe Aski Nation (NAN) deputy Grand Chief from 1994 to 1999. He acted as CEO for Moose Cree First Nation before assuming his role as Mushkegowuk Council Grand Chief in 2003, representing the seven communities of Attawapiskat, Kashechewan, Fort Albany, Moose Cree, Taykwa Tagamou, Chapleau Cree and Missanabie Cree.

Instrumental in bringing awareness to the water situation in Kashechewan in 2005, he brought the Attawapiskat housing crisis into the limelight. In 2011, he was awarded an Honourary Doctorate of Education by Nipissing University in a nod to his leadership and service to Mushkegowuk Peoples and all Aboriginal people throughout Canada.