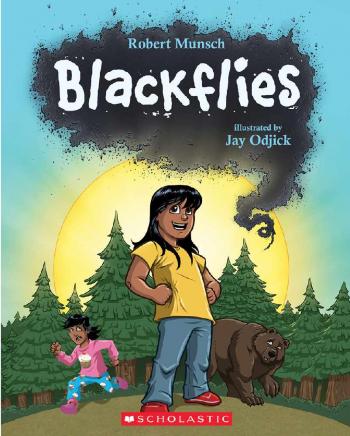 Blackflies will be available this month

A beloved children’s author just made history in children’s literature in Canada. Robert Munsch, known for his children’s books published through Scholastic Canada and shared in classrooms, bookstores, and public libraries across the country, will soon strike a chord with Canada’s First Nations people.

His upcoming release, Blackflies, uses a narrative shared with him by a First Nations family he met in Fort McMurray in 1996, and utilizes illustrations by First Nations artist Jay Odjick to help tell the story.

“I think it’s a great, fun and funny story. There’s no location given, but I know it’s based on a story Rob was told when he visited a First Nations community. He used to go to a lot of First Nations communities and the idea for this sprung from a kid telling him a story about blackflies and how bad they were,” said Odjick.

The story is about a young girl who wakes up one morning to all the snow around her home having melted. She is overwhelmed with joy at the prospect of going outside, but then sees the blackflies. She later watches various family members be picked up by “sixty-five gazillion mosquitoes and black flies” and carried away to the nearby forest.

Odjick says he had a fantastic time creating the drawings for the publication because the story line is so comical.

“She tries out increasingly stinky bug sprays… She tries out three before she finally goes ‘Ok, here’s the one I need,’” he said.

“There were a few pages where I was cracking up while drawing because of the people reacting to the stench. And we don’t only have people reacting, but animals reacting too... I think kids will dig it. Everybody finds stinky stuff funny, right?” he said.

Odjick is familiar with blackflies on a personal level because of where he grew up, on the Kitigan Zibi Anishinabeg First Nation in Quebec, the flies would come in droves during long, hot summers. Odjick says when the flies arrived it was hard to even bring himself to go outside and face them—much like how the girl in Munsch’s story feels.

Odjick has been creating illustrations for many years. He received his first rejection letter at age 11 from Marvel comics, after submitting personal drawings to them. Since then he has refined his practice, and has published various works, including some that have become a TV show—aired not just in Canada, but Australia as well.

He was fortunate to be able to draw for Blackflies from his own experiences to bring the Munsch story to life.

“Ninety-Five per cent of it is outside, so I just drew it to look like where I was from. And I tried to draw things that denote a First Nations house, so traditional rugs, and a drum hanging on the wall, and some pottery… Things like that,” he said.

He’s worked with Munsch on projects in the past, but not anything that hit the mainstream. A number of Munsch books were translated into Anishinaabemowin for a local First Nations college under a language initiative a decade ago, and Blackflies was on that list. But Odjick didn’t have his original drawings when Scholastic called him last year for another round of publishing.

“Scholastic contacted me and asked me if I had art files for the other books and I said no, it’s been too long, but I’d be interested in drawing it again. I redrew it in September to December of the past year,” he said.

“I’m sure it’s much better now because this is after a decade of experience and having better hardware. Even if I had been able to go back and look at it I wouldn’t want it to influence what I do now,” said Odjick.

The most gratifying part for him is knowing that First Nations children will have the chance to see their faces reflected in popular books, like those in the Robert Munsch collection. Odjick feels when he was a kid, First Nations people were underrepresented in media, and for the most part still are.

“I think the most important thing in my career is to try to give our kids First Nations characters that look like them. It’s important to represent ourselves,” said Odjick.

“And a lot of kids already have a connection and an attachment to Robert Munsch... So I’m excited, and I think it’s really awesome,” he said.

The book will be available through Scholastic starting with bookfairs this month. For more information go to: http://robertmunsch.com/poem-story/blackflies

Due to the great interest in the book Blackflies, written by Robert Munsch and illustrated by Jay Odjick, the book will be available commercially March 31, Odjick said.

“This is actually really cool,” he told Windspeaker.com “Scholastic intended for Blackflies to be made available thru schools first this year via their book fairs and available in stores only in 2018... However, now the book will be available commercially March 31 of THIS year! That's amazing,” he said.

“Shows the strength of people being vocal and I couldn’t be more excited. Odjick said Amazon.ca and Indigo/Chapters already have it listed for pre-order.

“It's really incredible - and I never saw that coming!” He thanked Windspeaker.com and other media for getting the word out about the book… “Without that, no one knows about the book thus, there is no demand! So we were able to influence HUGE corporations; Indigo and Amazon, saying we want this book NOW and Scholastic shifting a schedule by a year...amazing, amazing stuff.”

“I said I wanted to draw this book to give Indigenous kids a book with characters like them, to open doors for other Indigenous creators - and to show there's a market for projects like this on a BIG scale.

We succeeded. Thank YOU! Migwech!”

Notice of Receipt of a Repatriation Application